Preliminary results suggest that 2019 is likely to be either the second or third warmest year on record, with globally annual averaged air temperatures now 1oC warmer than the long-term average calculated for the period 1961 to 1990.  This warming is driven by increasing concentrations of all the major long-lived greenhouse gases in the atmosphere, with carbon dioxide (CO2) concentrations rising from 208ppm prior to the industrial revolution, to 413.65 ppm as of 4 January 2020 (NOAA, 2020).

In Australia, warming in average temperature has resulted in 2019 being the warmest year on record (1.52oC above the 1961 to 1990 average of 21.8oC) (BoM, 2020). Average daytime maximum temperatures in 2019 of 30.69oC were 2.09oC above the 1961 to 1990 average.  In December 2019 more than 40% of the entire country recorded maximum temperatures greater than the 97th percentile i.e. top 3% of temperatures. Examining the shift in the distributions of monthly day and night-time temperature shows that very high monthly maximum temperatures that occurred around 3% of the time in the past (1951–1980) now occur around 12% of the time (2003–2017) (BoM & CSIRO 2018). Very warm monthly minimum, or night-time, temperatures have shown a similar change from 2% of the time in the past (1951–1980) to 12% more recently. This shift in distributions towards hotter temperatures and more extreme high temperature conditions has occurred across all seasons, with the largest change being in spring (BoM & CSIRO, 2018). 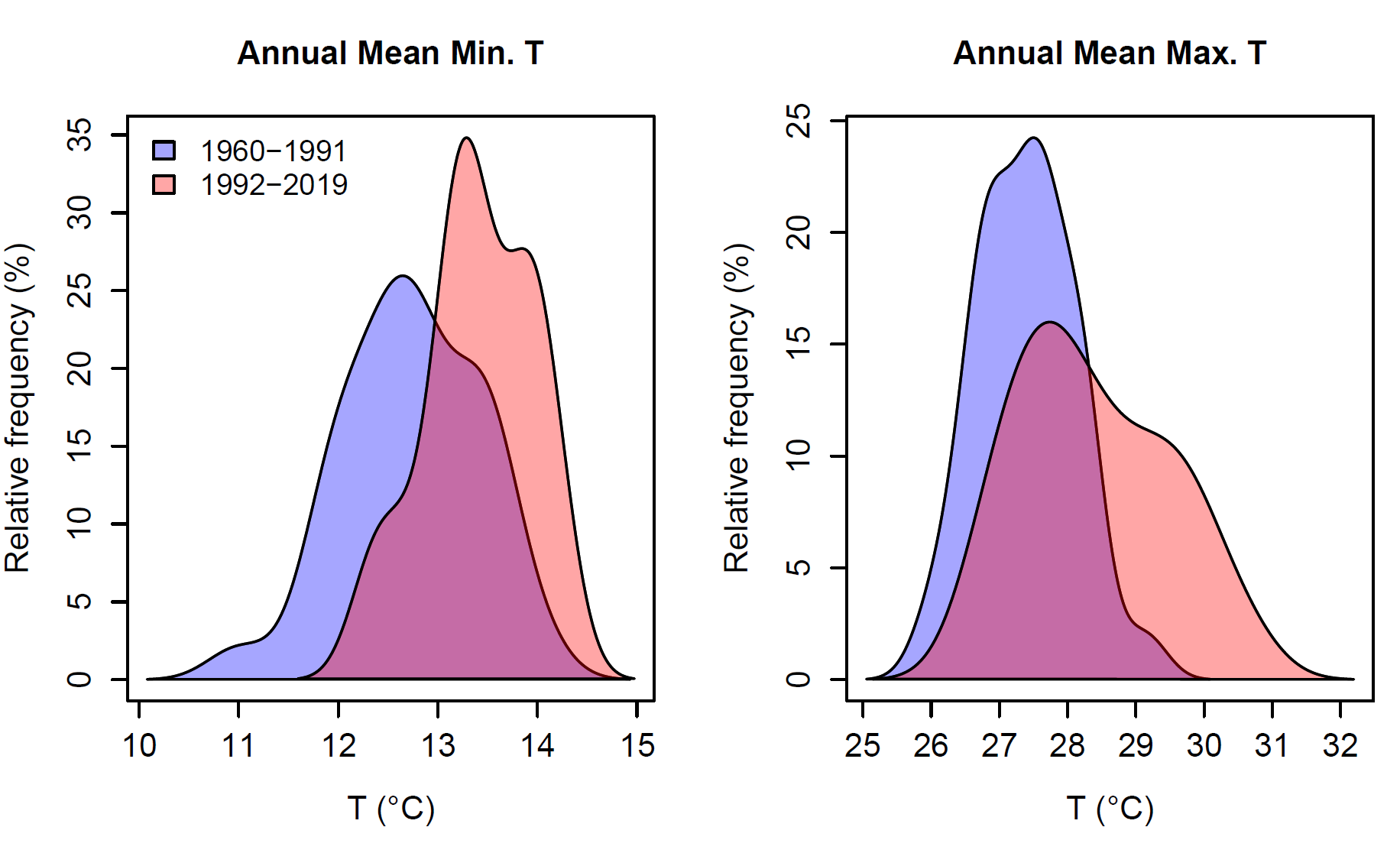 Figure 2. Probability distributions of daily maximum temperature extremes for Mungindi for two periods,
namely 1960 to 1991 and 1992 to 2019. 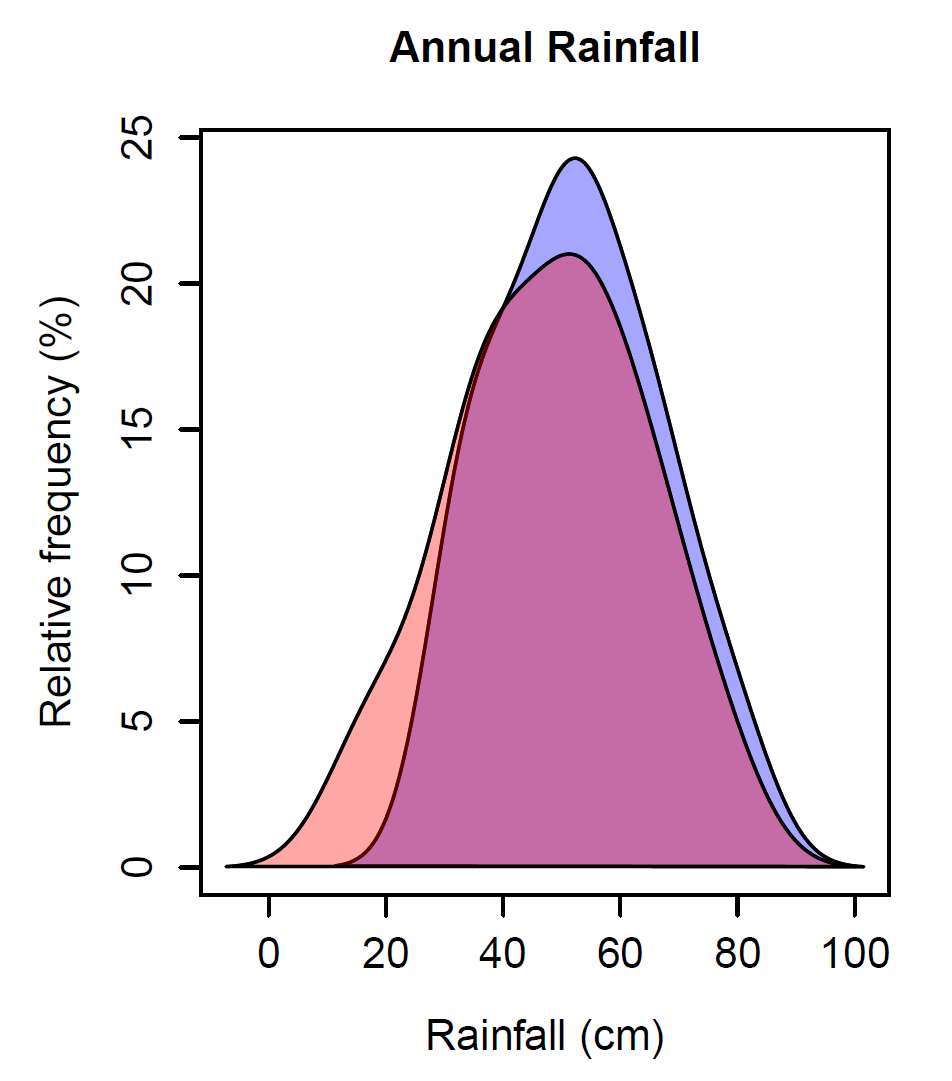 The current acceleration of global warming is expected to continue based on future Greenhouse Gas (GHG) emissions trajectories. Previous studies have examined how the rates of record-breaking have changed in the US (Anderson et al., 2011), the UK (Kendon, 2014), and Australia (Lewis & King, 2015). These studies have found increased rates of hot temperature records and decreased record setting for cold temperatures in recent decades (King et al., 2015; King, 2017). Lewis and King (2015) found that from 2000 to 2014 there were 12 times as many hot record‐breaking temperatures as cold records in Australia and attributed this to anthropogenic climate change. Recent BoM analyses has shown that from 1960-2018 the ratio of hot records to cold records set across Australia was 6:1 whereas from 1910-2018 the ratio was 9:1 (Blair Trewin pers Comm. 2020). In 2019 the ratio of hot to cold records broken at the state area average level was 34:0 (Blair Trewin pers Comm. 2020). Across the world, there were about five times more record‐breaking monthly temperatures than would be expected without a long‐term warming trend (Coumou et al., 2013) over the early 21st century.

During the 2018/19 Australian summer more than 206 individual location extreme temperature records were broken in just 90 days (Climate Council, 2019). Climate change has been found to not only increase the likelihood of breaking high temperature records (e.g. Lewis and Karoly, 2013), but record‐breaking hot summers and years over previous decades are also attributable to anthropogenic climate change (King et al., 2016). More recent research by Mann et al. (2018) has shown that the synoptic features (large scale weather systems) responsible for prolonged heatwaves are on average 50% more prevalent under a business-as-usual GHG emissions trajectory.

In addition to record breaking temperatures, changes in rainfall patterns, sea levels, rates of glacial retreat and biological responses have also been detected consistent with expected climate change projections.  This mounting evidence has led to scientific consensus that:

These changes are already likely to have negatively impacted on Australian agriculture, acting as a major drag on yield growth  with similar impacts on yield growth globally for the major crops (Porter et al., 2014).

A major issue in understanding historical and future climate change is how much are the various human-induced climate forcing’s (greenhouse gas emissions, stratospheric ozone depletion, Asian aerosols, and landcover change) interact with components of natural variability (Watkins 2005, McKeon, 2006). Thus, it is important for successful climate adaptation that agricultural decision-makers keep informed of the evolving climate science and updated climate change scenarios.  As scientific understanding improves and there is more confidence in emission scenarios, current and future uncertainties can be rapidly assessed in terms of decision making.

What is expected to happen in the future?

In response to the continued growth in atmospheric GHG concentrations, scientists estimate that global average temperatures could increase by up to 4.8oC by the end of the present century, dependent on global population growth, technological advancement and economic growth (IPCC, 2013). To put this in context, the difference between our historical temperatures and those of the last ice age was only about 5oC. So even though 4.8oC does not sound like much, it signals a huge change in how the climate-ocean-land systems of the earth function and hence how agriculture will operate.

In Australia, national projections suggest additional warming of up to 1.3oC of additional warming could be experienced by 2030 and up to 5.1oC of warming could be experienced by 2090, with the greatest warming being in inland Australia and the lesser warming along the southern coast and Tasmania (CSIRO, 2015). Global studies indicate that a rule of thumb is that global potential crop production drops by 6% per degree warming (Porter et al., 2014).  Whilst changes in rainfall are more uncertain, projections suggest drier conditions in the southern half of Australia, particularly in the south-west and during the cool season months of May to October, with as much as 20% less by 2030 and up to 50% less rainfall by 2090 in the south-western parts of Australia by 2090, respectively (CSIRO, 2015).

At a regional scale, projected change in climate for the New England and North West region (Mungindi represents a town in the centre of this study region) are summarised in Table 1.  In addition to warmer temperatures, evaporation rates are likely to increase. By 2030 the median value of annual potential evaporation is projected to increase by 7 % under a high emissions scenario.

Table 1. Projected changes in temperature and rainfall for New England and North West region (Mungindi represents a town in the centre of this study region).  Present average temperatures and rainfall are calculated for the period 1986 to 2005.  The data contained in this table represents information compiled from the NSW Department of Planning and Environment.

Climate change is likely to pose a significant challenge for Australian agriculture. Of greatest concern are likely to be changes in water availability, and the change in frequency of climatic extremes (e.g. heatwaves, drought and floods).

There are also longer-term decisions at a family farm level - to sell up, to buy more land, where to invest. These are especially pertinent for farmers in low rainfall regions and it will increasingly be more difficult to find no-regret decisions if climate change progresses as anticipated (Hayman, 2005). These decisions, along with industry infrastructure (silos etc.) and industry support (drought policy) are hard decisions requiring full understanding of the likely future risks (Hayman, 2005).

The value of adaptation

In Australia a number of studies have examined the economic benefits of adaptation in the wheat industry at both national and regional scales under a range of likely future climate conditions.  Hochman et al. (2017) highlighted that the adoption of new technology and management systems held actual yields fairly steady: without these advances, water-limited yield would have dropped by 27%. It was estimated that rainfall declines should have accounted for about three-quarters of the fall in simulated yield potential, whilst observed warming should have accounted for about a quarter of fall in yield potential.

Continued adaptation to climate change has been estimated to add an additional AU$500M per annum (Howden and Crimp, 2011) via the introduction of improved water-use efficiency options and may mitigate potential yield losses by up to 18% through broader scale adaptation (Ghahramani et al., 2015).

Advisers have a vital role to play in this dialogue, not only in assisting grain growers in reducing greenhouse gas emissions from on-farm activities, but also in developing information systems that growers can tap into in order to build farming systems that can cope with current climate variability and can adjust to ongoing climate changes.

McKeon, G.M. (2006).  ‘Living in a variable climate’, article prepared for the 2006 Australia State of the Environment Committee, Department of Environment and Heritage, Canberra.

The authors would also like to acknowledge that this research was made possible via financial support from the New South Wales Department of Planning and Environment. We would like to acknowledge the Australian Bureau of Meteorology (BoM) for provision of its Australian Climate Observations Reference Network – Surface Air Temperature (ACORN-SAT) data.