Dual-purpose crops hold great potential to utilise early-season sowing opportunities to provide extra grazing for livestock and maintain grain yield.  With good management, the period of grazing can increase net crop returns by up to $600/ha (i.e. 2000 sheep grazing days at 28c/day) and have a range of system benefits including widening sowing windows, reducing crop height, filling critical feed gaps and spelling pastures.  Over ten years of experiments, simulation studies and collaborative on-farm validation across Australia has demonstrated that a wide range of cereal and canola varieties can be successfully grazed and recover to produce combined livestock and crop gross margins that exceed grain-only crops and increase whole-farm profitability (Table 1).

In a review of 134 different grazing wheat experiments we found <10% returned less than grain only wheat crops, the median increase in net returns from grazing was 25% and in one third of cases, net returns increased by 75% or more.  In the 87 canola grazing experiments returns were somewhat less (median 17%) due to less grazing, and higher grain-value and so increased economic risks from yield reductions (Figure 1). 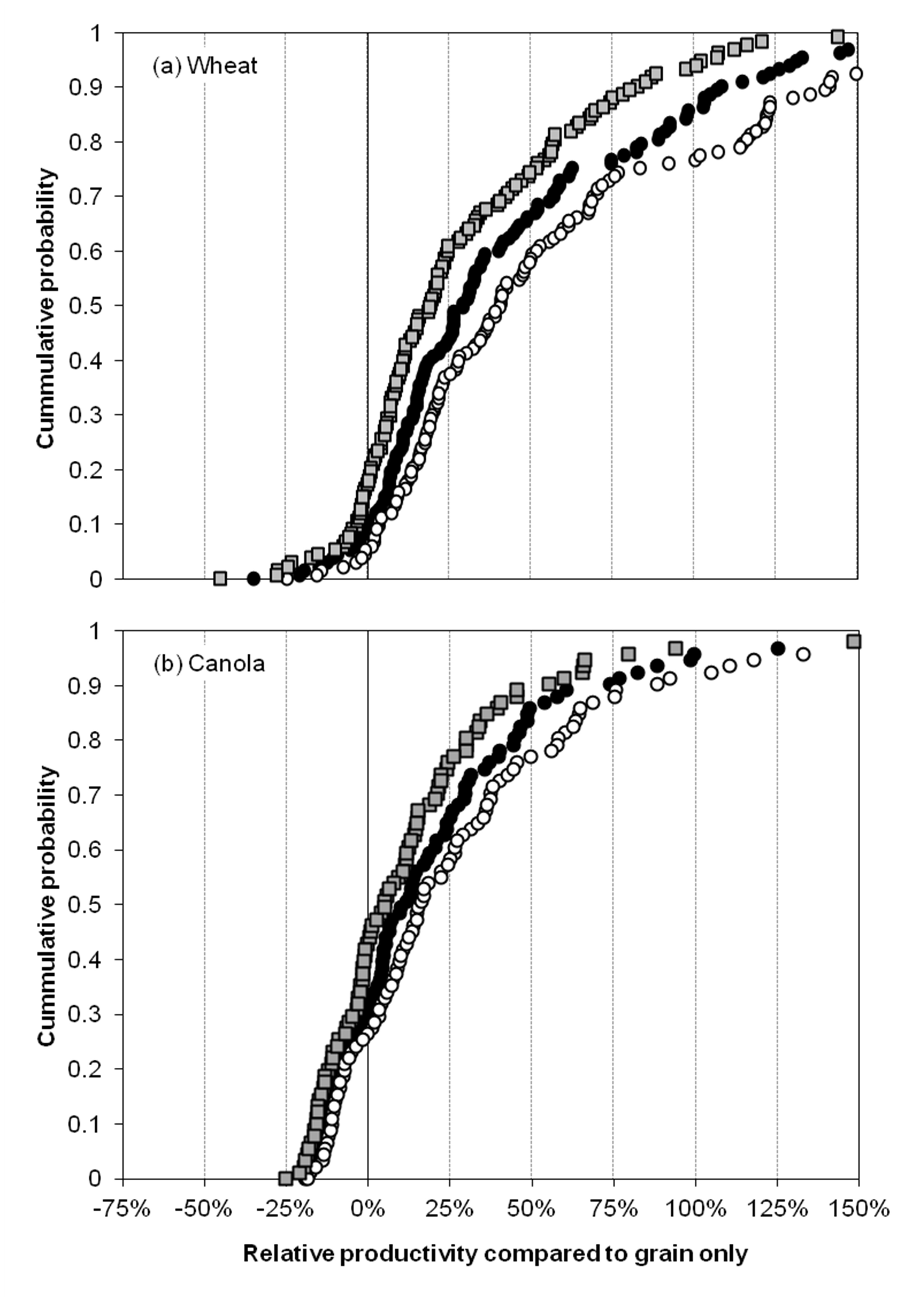 Figure 1. Analysis of relative estimated returns from grazed dual-purpose wheat (n=134) (a) and canola (n=87) (b) compared with grain only system across experiments where biomass for grazing (or grazing days) and subsequent grain yield was measured in Australia. The impact of different price ratios between livestock and grain (i.e. $/kg liveweight compared to $/kg grain) on total returns are shown when prices for livestock are relatively high (hollow circles; wheat – 10, canola – 5), average (filled circles; wheat – 8, canola – 4) and low (grey squares; wheat – 6, canola – 3). Livestock yield was estimated assuming a feed conversion rate of 0.17 kg LW/kg of forage consumed (based on data in Dove and McMullen, 2009) ; where available biomass only was measured 60% utilisation of this was assumed.

The greatest advantage of dual-purpose crops is when they are sown early to utilise early season sowing opportunities (e.g. before end of April). At this time the long-season winter cultivars provide high yield potential without the frost risk for sowing spring cultivars at that time, because the vernalisation in these cultivars control flowering to a time of year when risks are low. At the same time the earlier sowing of the varieties will yield much more grazing opportunities. After early May the dual-purpose varieties offer little advantage over the spring cultivars typically used for grain only production. 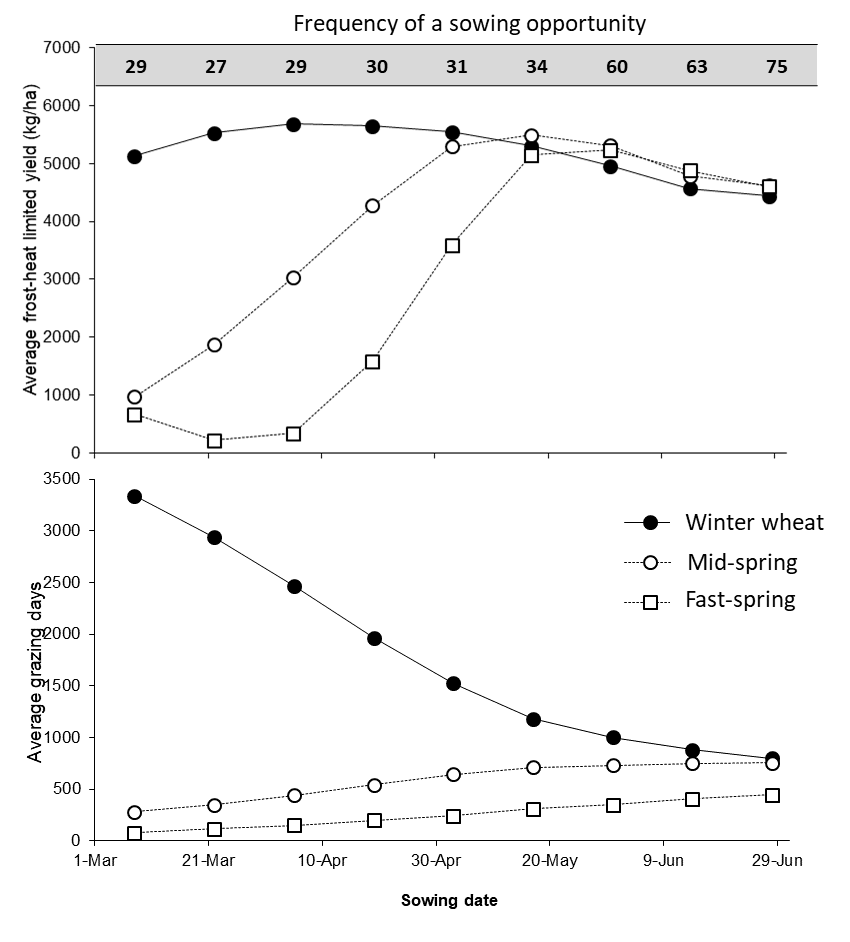 Figure 2. Simulated average grain yield and grazing potential from a dual-purpose winter wheat (e.g. EGA Wedgetail) compared to mid and fast-spring grain wheats for different sowing times at Quirindi. The frequency of a sowing opportunity in each of these sowing windows is also predicted based on the proportion of years when rainfall exceeds potential evaporation over seven days in these fortnightly sowing windows.

Ultimately economics (feed value vs grain value) in the farm enterprise dictates the acceptable level of grain yield loss (if any) for dual-purpose crops.  In many cases, especially where the feed is being used to fatten or finish lambs or cattle, it is possible that accepting a grain yield penalty makes the most economic sense, as shown for the moderately grazed crop shaded in Table 2. However, managing these potential trade-offs to optimise profit will be influenced by the relative value of grain or livestock feed in that season as well as your location.

Table 2. Amount of grazing achieved and grain yield from different grazing treatments in a crop of EGA Wedgetail at Greenethorpe in 2013.  Income was highest with a small grain yield penalty as the extra grazing was more profitable than yield lost.

Spring wheats such as EGA Gregory can also be grazed with success, but due to the later optimum sowing dates and smaller safe grazing window, the amount of grazing achieved is much less (Table 3).  The effect of grazing too late and/or leaving too little residual biomass (<0.5 t/ha) can be seen to impact on the economic outcome.  In this case with spring wheat, yield was only maintained with later grazing if a large amount of residual remained, and this did not match the economics of grazing hard earlier to provide time for recovery.  In general, a much greater level of attention is needed to manage the timing of lock-up in spring crops as development is rapid and the plants less robust. But grazed spring wheat and canola crops can widen the crop-grazing window at the farm-scale.

Table 3. Amount of grazing achieved, grain yield and additional income from different grazing treatments in an EGA Gregory wheat crop at Greenethorpe in 2014.  The best outcome was to graze safely with economic penalties for later or harder grazing.

Dual-purpose crops can provide valuable winter forage in livestock production systems and greatly reduce the frequency of feed gaps in winter and can allow higher winter stocking rates. By removing grazing pressure on pastures at this time they can also increase subsequent pasture availability. Using experimental measurements of sheep grazing on pasture only or dual-purpose crops of wheat, canola, and wheat and canola in combination, and their associated effects on subsequent pasture grazing, we estimated for two different years whole-farm changes in whole-farm sheep grazing days, relative farm production and farm economic impact. The increased winter feed supply and the higher grazing intensity on dual-purpose crops allowed 2-3 times the area of pasture to be spelled which together enables increases in potential year-round pasture stocking rate (Table 4).

^Combined crop grazing on Pcanola+wheat measured experimentally were obtained from twice the crop area (i.e. two experimental plots) and hence were halved to calculate on a per crop hectare basis.

Up to 20% of farm area could be allocated to dual-purpose crops while still obtaining the same number of grazing days per farm hectare, with the benefit of additional grain production (5.0-5.4 t wheat/ha and 1.9-3.6 t canola/ha) adding significantly to farm profitability and production. Allocating 10-20% of the farm to a combination of dual-purpose wheat and canola grazed in sequence, could increase whole-farm sheep grazing days by 10-15%, increase farm output by >25% and increase estimated farm profit margin by more than $150/farm ha compared to pasture-only livestock systems (Figure 3). The long crop grazing period from using both dual purpose wheat and canola in combination, providing a large pasture spelling benefit was a key factor enabling these economic and productivity increases.  Introducing wheat or canola alone on up to 30% of the farm is likely to reduce sheep grazing days/farm ha, but still significantly increase whole-farm productivity (10-20%) and estimated profit margin ($50-100/farm ha).

Over the two very different experimental growing seasons, the estimated relative changes in whole-farm productivity and estimated profit margin were similar, indicating that these benefits are likely to be consistent over a range of years. Similarly, price sensitivity analysis also shows that these results are robust under a range of prices for livestock and grain (Table 5). Together these findings suggest that once whole-farm livestock feed-base effects are considered, large economic and productivity benefits can be attributed to dual-purpose crops when integrated into livestock production systems in Australia’s southern high rainfall zone. 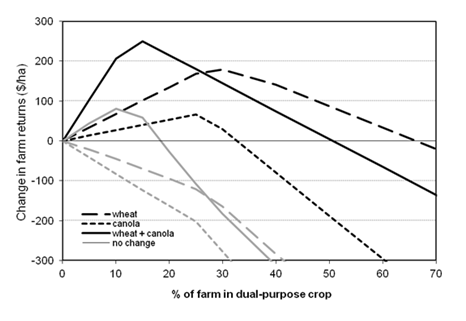 Table 5. Sensitivity of changes in estimated farm profit margin to 20% higher and 20% lower grain and livestock prices when 20% of the farm has been allocated to dual-purpose crops (average of both experimental years).

Changes to the livestock enterprise to capitalise on the additional winter feed supply can also bring about further gains from dual-purpose crops. Analysis conducted by Shawn McGrath in southern NSW, shows that shifting lambing from spring (August) to autumn (May) can increase lamb production and farm gross margin (Table 6). This is further improved when this is combined with higher stocking rates which make better use of this winter feed source. For example, increasing stocking rate by 25% (e.g. from 6 to 8 ewes/ha) the increase in gross margin from incorporating the dual-purpose crop was 67%, supplementary feeding was dramatically reduced, and lamb production and likelihood of meeting premium market specification increased. This clearly demonstrates that dual-purpose crops can allow significant changes in the livestock enterprise while reducing risk and increasing productivity and profitability.

The introduction of a dual-purpose crop offers some opportunities for disease prevention in the livestock enterprise. Often, young animals are the most susceptible to disease risks, particularly as they transition from milk feeding to grazing. Gastrointestinal parasites, blow fly strike (cutaneous myiasis) and skin-penetrating grass seeds are all threats to recently weaned lambs. Spring lambing with weaning onto pastures in late summer and autumn leaves animals exposed to all three threats, particularly in northern NSW. In these areas, the summer/autumn period is risky for Barber’s pole worm (Haemonchus contortus), the most pathogenic of the major gastrointestinal parasites, blow fly strike, and damage from particular perennial grass seeds. The filling of the winter feed gap with dual-purpose crops provides the opportunity to shift lambing dates earlier and hence mitigate some of these animal health risks.

Simulations of the risk of flystrike over a 30-year period was much higher when the lambs were born in late-winter/spring (September) than in late-autumn (May) by a factor of 6 to 15 (Table 7). A longer period lambs spent on farm before sale due to lower growth rates, always increased the incidence of flystrike. Late-winter/spring born lambs on a property with an average risk of flystrike would require preventive treatment, with the cost depending on the time of sale. Lambs born in May might not require preventive treatment, unless growth was slow resulting in their sale later than October. The net benefit from dual-purpose crops allowing a shift in lambing date and higher winter growth rates is likely to be in the order of $1.0-1.5/lamb. We expect similar results for reducing worm burdens but analysis and quantification of the scale of this benefit is ongoing.

Table 7. Comparison of autumn vs spring lambing under high and moderate lamb growth rates on average flystrike incidence (number of lambs) and costs ($) per lamb weaned over a 30-year period (1988-2018).

Much of this research undertaken as part of this project is made possible by the significant contributions of growers through both trial cooperation and the support of the GRDC, the author would like to thank them for their continued support. Some recent work was undertaken in a MLA Donor Company project (P.PSH.1045 – Dual-purpose crops for lamb production in Northern NSW and Southern Qld).