Invertebrate pest management is often seen as a low priority, particularly compared to weeds, with a recent survey finding only 0-1% of respondents regard pest control as a concern for maximising yield (Zhang et al. 2019). This may be due to the sporadic nature of pest outbreaks (economically threatening pest situations do not occur every year), as well as the relative ease and low cost of using broad-spectrum insecticides. This begs the question: why are so many prophylactic insecticide treatments (e.g. seed treatments or ‘just in case’ inclusion of insecticide with another spray treatment) used?

Alarm bells only seem to start ringing when there is a new pest incursion such as the wheat curl mite/wheat streak mosaic virus, Russian wheat aphid and the current fall armyworm. However, even this anxiety generally only extends for one to two seasons after which it is realised that an outbreak does not occur every year. In fact, it is highly probable that the ‘new’ pest may have already been present for a season or two prior to the outbreak and it was only that favourable environmental conditions and/or a disruption to natural enemies that led to excessive population growth and spread. Another driver for management change can be insecticide resistance. Currently, organophosphate resistance in red legged earth mite is present in south-eastern Australia and spreading, while green peach aphid (GPA), corn earworm and diamondback moth have all developed resistance to a range of insecticide formulations (McDonald et al. 2019).

Integrated pest management (IPM) is a method of pest control that uses a range of practices, including chemical control, but relies heavily on natural enemies (predators, parasitoids and disease). However, with the exception of grain regions strongly influenced by cotton production, implementation of IPM is relatively low in broadacre cropping, with lack of knowledge and low confidence in its efficacy often cited as reasons. The aim of this work was to increase the knowledge base and confidence in IPM by assessing the impact natural enemies have on aphid populations in canola. In addition, it was hoped that this data could be used to inform economic thresholds to include natural enemies.

Cage trials were conducted in canola paddocks in NSW, VIC, SA and WA to assess the efficacy of natural enemies on green peach aphid (GPA) during September-October 2018 and July-September 2019. In 2018, up to five predators, either sourced from the surrounding paddocks (‘local‘ and differed in each state) or purchased (‘reared’ green lacewing nymphs (GLW)) were added to canola plants that had previously been caged, cleaned of any other invertebrates and inoculated with 50 aphids. To ensure insecticide seed treatments did not interfere with aphid establishment, aphid inoculations were delayed until at least 8 weeks post-sowing. Aphid numbers were assessed at various times over 15 days. In 2019, using a similar set up with the cages, three parasitoid wasps were assessed against varying densities (20, 100, 200 or 500) of GPA. Assessments were made on aphid abundance over time as well as the number of aphid mummies (aphids that have been parasitised by wasps) that developed over the 42 days.

In both trials, control plants were left open to the environment after aphid establishment to determine the effect of the local natural enemies within the paddock.  In addition to sweep net samples of the surrounding crop on Days 0 and 2 at all sites, funnel traps were placed within the NSW paddock and checked every 4 weeks from post-sowing to preharvest to assess the local presence of natural enemies throughout the season.

Despite some large variations in aphid numbers between cage replicates and regions, similar trends were found at each of the four cage trial sites. Local predators appeared to have some initial impact but were unable to control GPA by the end of the two weeks. However, in those cages with the five GLW nymphs added, as well as the open control cages which were exposed to all predators and parasitoids in the paddock, aphid numbers either decreased or were at least maintained close to the initial population. Unfortunately, poor environmental conditions and stressed canola plants appeared to hamper aphid population growth in the eastern states which resulted in low overall densities of aphids in all trial cages at those sites, but in Western Australia significant differences were found between the treatments (Figure 1). 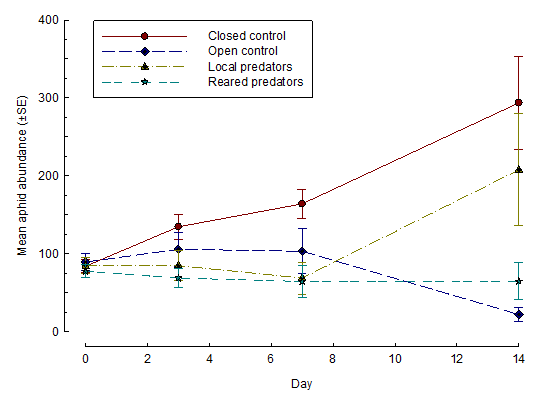 With the cage trials using parasitoid wasps the following year, results were again highly varied between cage replicates and regions. In hindsight, more conclusive results may have been found if a higher number of wasps had been added to each cage, but we were unable to repeat these trials due to issues with the equipment. However, while no significant GPA control was seen within the cages, significantly lower numbers of aphids were found on those open control plants (those plants exposed to the natural environment) inoculated with 100 GPA (Fig. 2), indicating that a combination of parasitoids and predators were able to exert some control of aphids at certain population levels. Despite closed cages being relatively open to the environment, it is possible that weather conditions (rain, wind) also contributed to the observed reduction in aphid numbers compared to the closed cages. 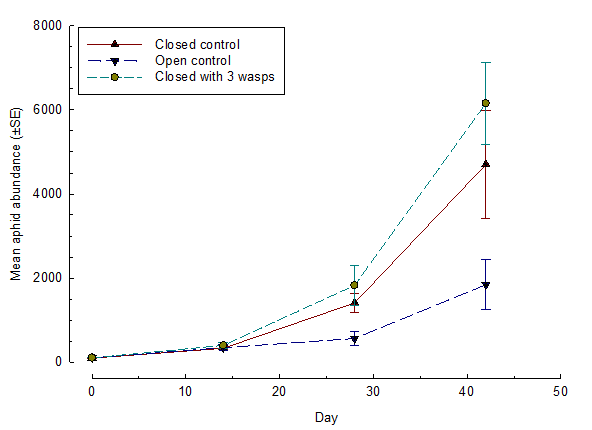 Mummified aphids were not found in any of the treatments until Day 28 indicating that estimates of parasitism in the field may be underestimated due to undiscernible parasitism. Generally, numbers of aphid mummies increased exponentially in the closed cages, with higher number of aphids producing higher numbers of mummies, although numbers were similar between the medium (100 aphids) and high (200 aphids) cages (Figure 3). The number of aphid mummies produced in the open cages were lower than the corresponding closed cage treatments (but again similar between high and medium), which may be due to a number of reasons such as lower parasitoid wasp activity in the field, environmental conditions or removal by predators.

Although numbers were much lower than those in spring, predators and parasitoids were present throughout the entire growing season, with small rove beetles (Staphylinidae) the most common predators during the winter. Also present were spiders and predatory mites. However, in response to an escalation in aphid numbers, as well as increasing temperatures, numbers of brown lacewings and parasitoid wasps also increased and became the most dominant natural enemy groups.

The number and proportion of natural enemies present in the paddock varied over both growing seasons (Figure 4). This was probably as a response to the differences in aphid populations between the two years. In 2019, aphid numbers showed an earlier escalation, reached a peak twice as high and had a marked decline in population prior to windrowing compared to 2018. This resulted in natural enemies, particularly brown lacewings, increasing their numbers earlier and to a larger degree. Interestingly, aphid parasitoid wasps had a corresponding decrease in numbers that coincided with the decrease in aphids.

These results emphasise the need to use selective rather than broad-spectrum insecticides whenever possible. While natural enemy populations tend to lag behind those of aphids, use of selective insecticides allows these populations to be retained, while decreasing aphid numbers, resulting in a higher proportion of natural enemies to pests. This increases the likelihood of maintaining aphid populations below the economic threshold for the remainder of the season and reduces the potential requirement of any additional insecticide sprays. 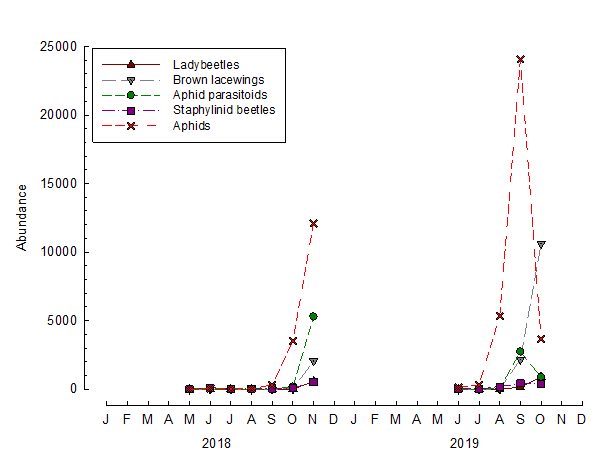 The results also highlight the complexities of trying to include natural enemies in economic thresholds. While often dealing with only one or two pests that require control at a time, there are a whole suite of natural enemies that may need to be considered such as predatory beetles, spiders, lacewings, predatory bugs, parasitoid wasps. All of these contribute, to differing degrees, to pest control, and many factors (e.g. life stage, temperature, species, prey preference, season, geography) influence their efficacy. Further, little information is known about many and trapping and identifying some for assessment may be difficult. These factors make it very difficult to include natural enemies into economic threshold calculations and provide ‘rule of thumb’ advice. Therefore, to inform spray decisions, it is probably more important to concentrate on monitoring pest abundance over time to determine the overall trends. At the same time be aware of the presence of natural enemies as these will contribute to pest control. If pest numbers are remaining stable or only increasing slowly, delay spraying. Naturally, if pest populations are increasing at a high rate, it may be necessary to spray. In these cases, use a selective insecticide wherever possible to conserve the natural enemies and allow their populations to grow.

The research undertaken as part of this project (CSE00059) is made possible by the significant contributions of growers through both trial cooperation and the support of the GRDC and the following partners: NSW DPI, CSIRO, cesar, SARDI, DPIRD. The author would like to thank them all for their continued support. The trial results presented are possible through the technical support of Rachel Wood, Julie Clark, Dusty Severtson, Thomas Heddle and Matthew Binns.