Farming systems research at Urana – What have we learnt to help improve farming profit?

Australian farmers have been enthusiastic adopters of crop benchmarking tools (such as the French and Schultz water use efficiency calculation or Yield Prophet®) to compare the performance of individual crops to their water-limited potential. However, in dryland farming systems, it is important to consider the efficiency of water use across crop sequences in order to account for the inevitable legacy effects (i.e., carry over effects on soil water, soil fertility, nutrition, weeds and disease).

To cover the wide range of soil and climate in southern NSW, experimental field sites were established at Wagga Wagga, Greenethorpe, Condobolin and Urana. A range of fully phased crop sequences were established in 2018 and compared with the common canola-wheat-barley baseline crop sequence (Table 1). These included more intensive cereal sequences (wheat and barley), a range of high-value (lentil, chickpea) and low-value (lupin, faba bean) legume options as well as grazing (Wagga Wagga & Greenethorpe only) and forage options. In addition, interactions of early sowing (March/early-April) and timely sowing (mid-April/mid-May) of wheat and canola options (grazed and un-grazed) and different nitrogen (N) management strategies based on either decile 2 or decile 7 outlooks were included. These treatments generated different water and N use patterns as well as weed, disease, residue loads and other legacies which were monitored across each crop sequence.

This article will focus exclusively on the Urana site to examine overall system profitability and dive deeper into the individual factors driving system performance.  Results from other sites can be found in previous update papers (Managing water and N across years and crop sequences to drive profit)

The N management strategies compared across some systems were based on either a conservative seasonal outlook (decile 2), or a more optimistic (decile 7) seasonal outlook. For each non-legume crop in each year of the sequences, soil mineral N was measured pre-sowing and a potential yield estimate was made based on starting soil water, N level and seasonal conditions up to that time. N was then applied as urea assuming either a decile 2 or a decile 7 finish to the season. Assuming an average season is decile 5, this means that often the decile 2 N strategy would be too low, and the decile 7 treatment too high to maximise yield potential in any year. Using this approach, the legacy benefits of carry-over N from either legumes or unused fertiliser N would be accounted for in the pre-sowing tests and less N applied accordingly. This approach (compared to set N rates) better mimics farmer practice.

The project utilised fully phased crop sequences.  As a result, each stage of a crop sequence occurs in every season. This method helps account for seasonal variability and generates higher quality results in a shorter number of experimental seasons. However, it is important to note that the seasons experienced during the experiment differed significantly. At Urana, decile 1 rainfall was received in 2018 and 2019, while decile 7 rainfall was received in 2020.

Diverse systems that include legume crops were the three most profitable systems followed by two timely sown Intense Baseline (canola-wheat) systems and the Baseline (canola-wheat-barley) system. Systems that included early sown, un-grazed canola and wheat crops performed poorly with three-year average EBITs significantly lower that the baseline treatment. This was also the case for the fallow system that included a chemical fallow one in every three seasons. What is driving systems performance?

The inclusion of pulse crops in the crop sequences has resulted in significant EBIT improvements. The three treatments with the highest three-year EBIT all included a pulse crop in their sequence (Figure 1). This effect could be due to several factors including (i) pulse crops are performing well economically on their own, (ii) they are providing legacy soil water, N and disease benefits which boost the economic performance of the crops following in rotation or (iii) a combination of both.

Averaged across all three seasons, the two legume crops examined in this experiment were more profitable than all other timely-sown crops (Figure 2). Variability in EBIT differed between crop types with lentils being among the most variable, but also resulting in the highest EBIT on average. Faba bean crops had the second highest EBIT on average while maintaining a lower level of EBIT variability than lentils.

Crops can leave behind a range of legacy effects that can influence the performance of the subsequent crops. Incorporating legume crops into crop sequences at Urana altered the soil water dynamic, increased soil mineral N and improved both the grain yield and EBIT of crops in these sequences.

In some situations, legume crops were leaving behind more soil water than the equivalent timely sown wheat crop and this benefit often carried through to sowing the following season (Table 2 and 3). Depending on the legume type and the season, between 10-40 mm of extra plant available water was available directly after harvest and 6-55 mm at pre-sowing in the following season compared to timely sown wheat crops in the same season. There were no clear trends in legume crop type and the corresponding amount of extra soil water remaining after harvest.

Legumes have the unique ability to contribute N to the system from the atmosphere via specialised N fixing bacteria (rhizobia) giving legume crops the potential to contribute N to subsequent crops. Although variable, the legume crops at Urana often resulted in more mineral N available at sowing for the subsequent crops (Table 2 and 3). Depending on legume and season, between 37-56 kg/ha of extra mineral N was available at sowing in the subsequent season as compared to the timely sown wheat crops in the same season. Much of this N wasn’t available directly after the legume harvest, but instead became available over the summer fallow period. Table 2 shows an example where a faba bean crop in 2018 continued to provide legacy N benefits 16 months after the crop was harvested.

To place an economic value on legume legacy effects, comparisons were made between crops following a range of legume crops and a timely sown wheat crop of the equivalent N decile grown in 2018 (Figure 3). Wheat and canola crops following legume crops had both higher grain yields and EBITs compared to those following wheat crops. This did not occur in every situation, however on average a 0.16 t/ha yield advantage for canola directly following the legume crop and a 0.54 t/ha yield advantage in wheat following that canola crop was measured. This transfers into an average EBIT benefit for canola and wheat of $95/ha and $158/ha respectively.

The higher N decile treatment in the non-legume sequence (W-C) provided an increase in grain yield for the 2020 wheat crop equivalent to the legume legacy effect in some sequences, however this was not the case in the 2019 canola crop (Figure 3). Overall, running a higher decile N strategy on the non-legume sequence (C-W) did not provide the EBIT benefits that legume legacies have in the various legume crop sequences (C-W-Legume). 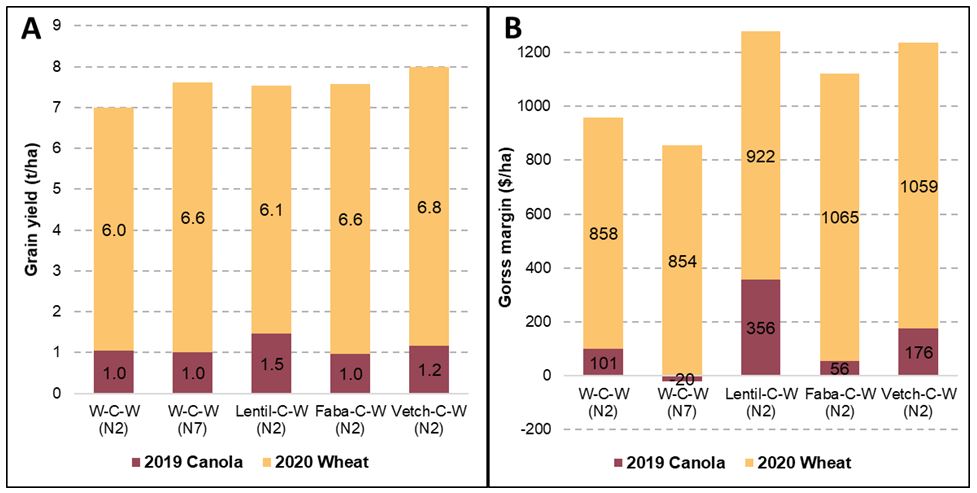 The research undertaken as part of this project is made possible by the significant contributions of growers through both trial cooperation and the support of the GRDC, the author would like to thank them for their continued support. The authors would like to especially thank Warakirri Cropping “Karoola Park” for their support and co-operation in hosting the Urana field experiment. The authors would also like to acknowledge the contributions of Graeme Sandral for his role as site leader during the first two and a half seasons of the project. We also thank Chris Baker (Baker Ag Advantage), Tim Condon (Delta Agribusiness), Greg Condon (Grassroots Agronomy), James Madden (Lockhart), Heidi Gooden (Delta Agribusiness), Peter Watts (Elders), Rod Kershaw (Landra) and John Stevenson (Warakirri Cropping) for the many useful discussions in their role on the project advisory committee.