Pulse and pasture legumes can provide an abundant, inexpensive and sustainable source of nitrogen (N) for Australian cropping systems through fixation by root nodule bacteria (rhizobia). Cereal yields are consistently greater following legumes due to these N inputs, and other benefits including disease and weed breaks and improvements to soil structure and biological function.

Not all pulses in Australian farming systems are well nodulated and fix optimal N. N fixation is dependent on an adequate number of suitable root nodule bacteria (rhizobia) (Drew et al. 2012, Denton et al. 2013). When suitable rhizobia are not present in sufficient numbers naturally in the soil then they must be provided at sowing in the form of a commercial inoculant product.

In low rainfall cropping systems, sowing pulse crops early in the season into dry soils can offer substantial crop growth advantages in these short-season environments. However, rhizobia are sensitive to desiccation and the consequences of dry sowing on rhizobia survival in different inoculant formulations are poorly understood.

Work is presented from trials which aim to optimise guidelines for inoculation when dry sowing; considering the extent to which dry sowing affects nodulation, nitrogen fixation and grain yield of pulses. Impacts of different inoculant formulations and other stresses on nodulation at sowing, such as soil acidity and seed applied pesticides are also considered.

When is inoculation of pulse crops necessary?

Inoculation provides one of the most cost-effective ways to improve legume performance where the legume (or another from the same inoculation group) has not previously been grown and/or where conditions are detrimental to the survival of rhizobia in the soil.

Chickpea and lupin are typically responsive to inoculation in the GRDC southern region because they have been less widely grown and their rhizobial requirement is more specific than for some other legume species. The first time they are grown, nodulation can often be improved by increasing the rate of inoculation.

Pea, bean, lentil and vetch are nodulated by the same species of rhizobia and have been widely grown in southern region. These rhizobia survive reasonably well in neutral/alkaline soils, so many Victorian and South Australian soils support adequate populations of rhizobia for these legumes, and therefore, inoculation via a commercial product is not necessary. Nonetheless, inoculation of these legumes is still necessary where:

What rhizobia inoculant types are available?

Peat slurry inoculants supplied at high quality by inoculant companies have been used effectively over the last sixty years in Australia. However, the method of their application to seed can be inconvenient, especially when dealing with large volumes of pulse seed when there are time pressures around sowing. Peat inoculants that carry the ‘Green Tick’ logo (Figure 1) have been approved by the Australian Inoculants Research Group, NSW DPI. This logo indicates that the product meets minimum quality standards for purity and number of rhizobia per gram of product. It is recommended that you choose inoculants displaying this ‘Green Tick’ logo wherever possible.

Granular inoculants generally contain fewer rhizobia per gram of product than moist peat inoculants. Their quality standard is the responsibility of the manufacturer, and therefore, they do not display the ‘Green Tick’ logo. Extension publications on the topic of inoculation when dry sowing state that; ‘sowing peat slurry inoculated seed into dry soil is not generally recommended where a legume crop is sown for the first time, since under some conditions the applied rhizobia may not survive at adequate numbers to provide satisfactory nodulation’. Dry sowing is less of a concern where a legume has been grown frequently and the soil is favourable to rhizobial survival. In these conditions the risk of nodulation failure is much lower. Hence, where the option is available, dry sowing is best restricted to paddocks where the legume has previously been grown.

Despite the potential impact of dry sowing on nodulation, it is still common practice. The three main granular rhizobia inoculant products available in Australia are all recommended by the manufacturers for use when dry sowing. There are anecdotal reports of success but there has been limited research to appropriately compare the performance of current formulations against peat applied to seed or to understand the limits of their efficacy. Field trials (funded by SAGIT) were conducted at two sites in South Australia in 2017 assessing a range of inoculant formulations at different rates and in combination. Treatments (Table 1) included peat on seed and freeze-dried inoculant, neither of which are currently recommended for use when dry sowing, but were included with the aim of providing better guidelines for growers around dry sowing.

Table 1. Inoculant treatments and products used in trials at Wanilla and Farrell Flat in 2017.

Note: All products were sourced direct from the manufacturer except Alosca granules which were sourced from Landmark.

In this trial, faba bean (PBA Samira) was sown dry at Wanilla on the Eyre Peninsula. This was a particularly harsh test as the soil was sandy with a pHCaCl2 4.3 and seed was in the ground dry for four weeks (time of sowing (TOS) - 28 April) before a germinating rain event occurred. There were large differences in the performance of the different inoculants (Figure 2). Novozymes® TagTeam™ granules alone and BASF Nodulator® granules combined with peat slurry provided the best nodulation and surpassed the nodulation provided by the standard peat slurry inoculation on seed (Peat) (Figure 2). The result was partly explained by the number of rhizobia per gram of product (data not shown), in that the more rhizobia applied to seed (or in furrow) the greater the likelihood of rhizobia survival when seed germination occurs.

Despite a very dry finish at Wanilla which limited faba bean grain yields, all inoculants improved yields for the dry sown treatments (Table 2). Following a similar pattern to nodulation, both Novozymes® (N) granules and peat slurry on seed with granules (Peat + B. Granule) resulted in the highest yields. 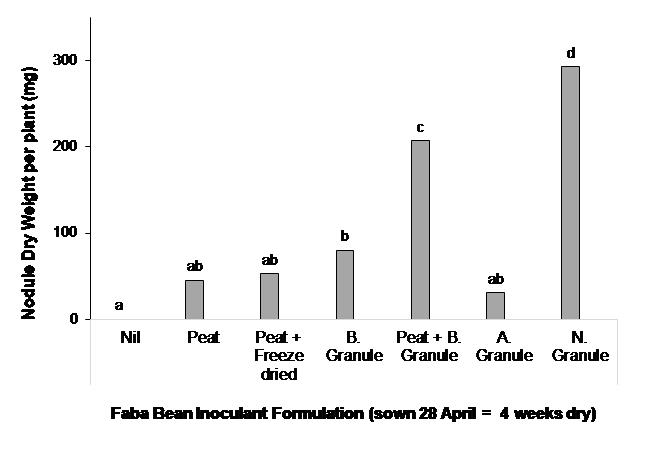 Figure 2. Effect of inoculant formulation on nodulation (measured by nodule dry weight per plant at 22 August) of faba bean when sown into dry soil at Wanilla, Eyre Peninsula SA. Different letters above columns indicate significant treatment difference at P<0.05. All inoculants are group F (strain WSM1455) as outlined in Table 1.

In this study, lupin (PBA Barlock) was sown at Farrell Flat in the Mid North of SA. This was a less stressful environment with a loamy soil of pHCaCl2 5.1 compared to Wanilla. Seed was in the ground dry for seven days (TOS - 13 April) before a germinating rain event. Different inoculant treatments were used in this trial compared to the Wanilla site (Table 1) as Novozymes® do not produce a lupin inoculant and Alosca granules could not be sourced for this trial. 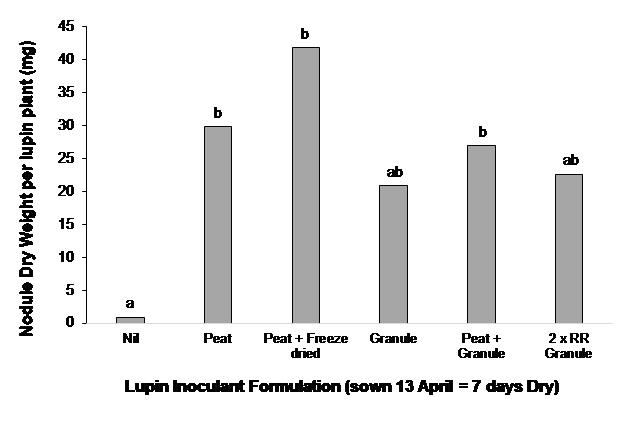 Figure 3. Effect of inoculant formulation on nodulation of lupin when sown dryat Farrell Flat, SA (TOS - 13April with seven days between sowing and sufficient rainfall for germination).Nodule weight per plant was measured on the 13 July. Different letters above columns indicate significant treatment differences at P<0.05. All inoculants are group G (strain WU425) as outlined in Table 1.

In a second faba bean trial at Wanilla, dry sown on 28 April 2017, the commercial group (Gr) F rhizobia strain (WSM1455) and two strains of rhizobia with putative acid tolerance (SRDI954 and SRDI969) were compared. Peat cultures of each strain were produced at SARDI and applied to seed at one of three rates (0.5, 1.0 or 2.0 times the recommended rate) within 24 hours of sowing. The 0.5 rate was chosen to reflect that in practice, inoculation is not always optimal and sometimes reduced rates are used to reduce costs and improve the flow of seed through machinery.

Applying the commercial strain at double the recommended rate resulted in good nodulation.

Similar results were measured in an inoculation rate trial for lupin (data not shown) where doubling the rate of peat inoculant also increased nodulation of lupin sown into a dry soil. 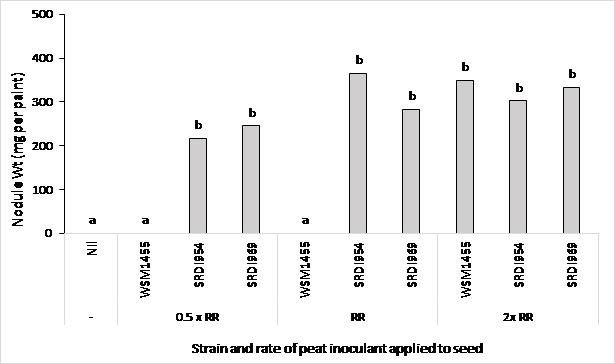 Can additives reduce the efficacy of rhizobial inoculation?

Care needs to be taken where rhizobia are applied with pesticides on seed, especially where seed is to be sown into dry soils at inoculation responsive sites. Rhizobia are best applied last and application time as close as possible to sowing. Within six hours of sowing is commonly recommended by inoculant manufacturers.

The impact of seed applied pesticides on rhizobia is often masked where there are naturalised rhizobia present in the soil. However, the impact is often evident on acid soils or when dry sown, where there are no background rhizobia. An example of such an impact is shown in Figure 5. The treatment of faba bean seed with P-Pickel T® (PPT; Thiram and Thiabendazole) fungicide prior to the application of a rhizobia (as a peat slurry to the seed) caused significant reductions in both the amount of nitrogen fixed and grain yield. These reductions were attributed to fewer rhizobia surviving on the seed and reduced nodulation (data not shown).

Where pesticide application is necessary, granular rhizobial inoculant may provide a better option as they reduce direct exposure of the rhizobia to the pesticide. 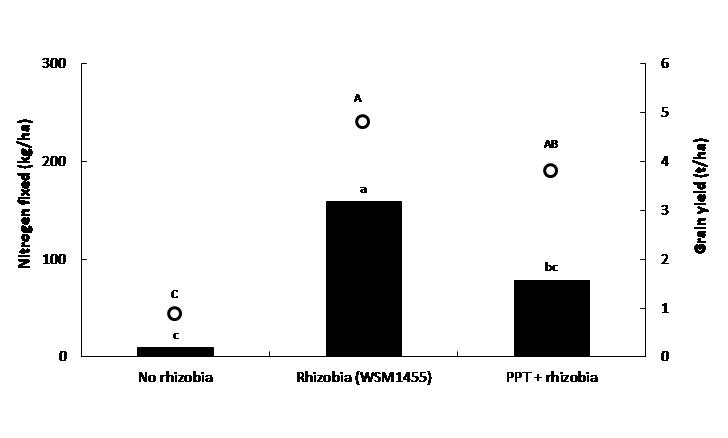 Peat slurry applied at the recommended rate worked well at the Farrell Flat lupin site but failed at the Wanilla faba bean site, where rhizobia was not able to survive the prolonged dry conditions in an acid soil. However, faba bean nodulation was restored to satisfactory levels when both the rate of inoculation was increased and/or the inoculant strain was changed to the new strains of rhizobia with putative acid tolerance.

Granules are not a cure-all for dry sowing situations. On only one occasion (Novozymes® Group F at Wanilla) was their performance exemplary.

Work to understand more about how rhizobia survive and nodulate under a range of stressful (dry and/or acid) soil conditions is continuing so that improved inoculation recommendations can be provided. Our results to date indicate that to optimise nodulation when dry sowing, application of rhizobia in high numbers is required which can be achieved by increasing the rate of inoculant applied.

In practice, inoculation is often used in conjunction with other seed additives. Growers should be very wary when using additives such as fertilisers, seed-applied fungicides and organic products with rhizobia. The use of these products in conjunction with inoculation may lead to reduced rhizobial survival, nodulation, N fixation and grain yield. Nodulation failures are usually not able to be rectified until the following season.

The research presented in the paper is made possible by the significant contributions of growers through both trial cooperation and the support of SAGIT (project S716) and the GRDC (projects UA00138, DAS00128).The authors would like to thank them for their continued support.