The efficiency that soil water accumulates during fallows and availability of that soil water for use by crops are key drivers of farming system productivity and profitability. Using fallows to accumulate soil water to buffer subsequent crops against the highly variable climate is critical in northern grain production systems. A range of factors can influence the efficiency of fallows (i.e. the proportion of rain that accumulates in the soil profile) including ground cover, seasonality or timing of rainfall events, the length of the fallow and residual water left at the end of the proceeding crop. Further, while accumulating more soil water prior to sowing a crop is always preferable, this often requires longer fallow periods, meaning there are additional costs for maintaining that fallow and the number of crops grown declines. Here we analyse the data from farming systems experiments across seven locations (Emerald, Pampas, Billa Billa, Mungundi, Narrabri, Spring Ridge and Trangie) over the past four years to explore the question; ‘how much does the farming system (i.e. mix of crops and their frequency) and different crops influence the accumulation and utilisation of water?’

We explore several factors influencing the accumulation of water during fallows and the availability of water for subsequent crops.

Here we compare the differences between different farming system strategies over the whole 4 experimental years to see how they differ in terms of fallow efficiency and water use. That is, how efficiently is water used in the system if it is modified  to increase/decrease crop intensity, change the mix of crops to grow grain legumes or other break crops more frequently, or increase the nutrient supply to the farming system. Across 10 different contexts we compare the following modifications to the farming system strategies:

Here we have analysed the efficiencies of all fallows within different farming systems across sites in order to examine how different strategies may impact on the efficiency of water accumulation during fallow periods (Table 1). That is, we calculated the ratio of all rain falling during fallow periods to the total accumulated soil water over these fallows across the whole crop sequence (not just individual crops).

Firstly, this shows that there are significant environmental influences on the efficiency of fallows, associated with the timing of rainfall events. Over our four experimental years, environments with more winter-dominated rainfall had lower fallow efficiencies – this is likely due to smaller and less frequent rainfall events occurring during summer fallows meaning that soil water accumulates less efficiently. Overall, though most baseline systems tended to achieve fallow efficiencies of 22% ± 4% over the whole cropping sequence. This is consistent with long-term simulations which show fallow efficiencies of 21-24% for cropping systems with crop intensities of 0.75-1.0 crops per year (i.e. 66-75% time in fallow). Robinson & Freebairn (2017) show fallow efficiencies of 25-30% under no-till in historical research but our data suggests that using a generic 30% FE may over-estimate fallow water accumulation in most cases.  Earlier research mostly examined systems where winter cereals were a larger component of the farming system, and cropping systems used now with higher proportion of legumes and summer crops are likely to achieve lower fallow efficiencies (see further results below).

Significant differences in the efficiency of fallows are also found between different farming systems treatments tested across the sites.  Key findings are: 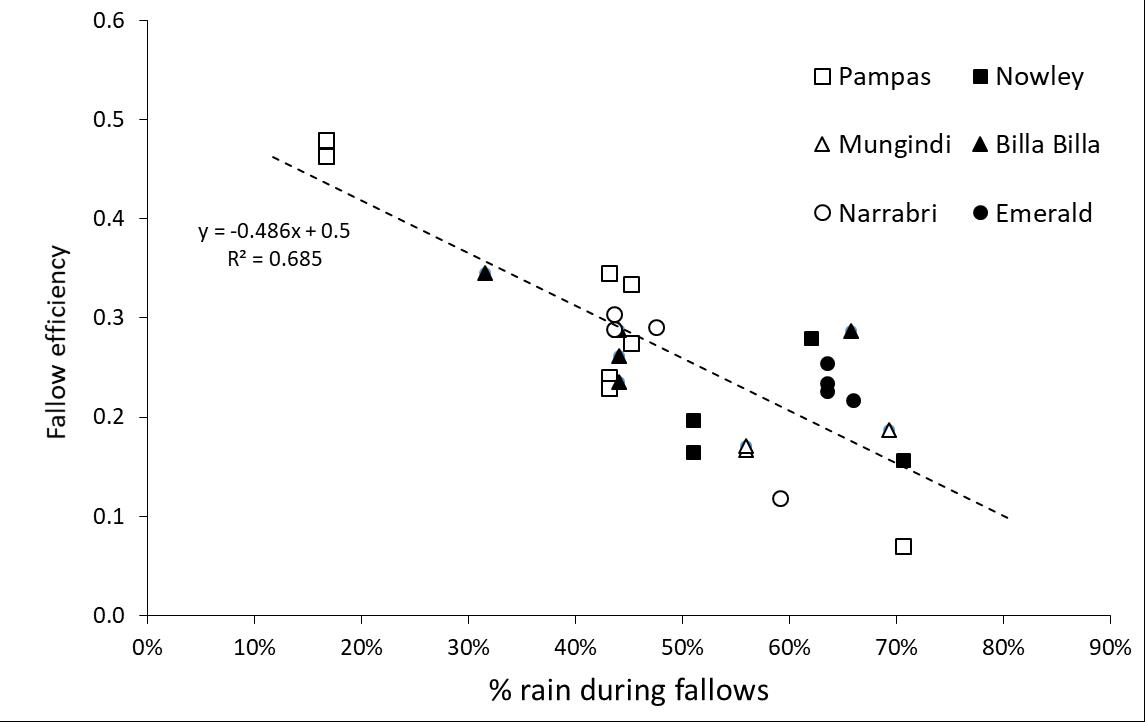 Figure 1. Relationship between the proportion of rain falling during fallow periods (i.e. time in fallow) and efficiency of fallows in the crop sequence (i.e. proportion of fallow rain accumulated in soil) across all farming system locations. Only baseline, low and high intensity systems are plotted, excluding altered crop diversity or legume frequency as this changes fallow efficiencies (see Table 1).

What this means is that a crop grown after a longer fallow in a lower intensity system must generate 1.5-times the gross margin per mm of water used to be equally profitable. This is achievable in most cases (see results later in this paper) but it does mean that these crops must be managed to maximise their WUE in order to make up for the lower utilisation of water across the system.

Table 2. Differences in the percentage of total rainfall that was used by crops (i.e. in crop rain + change in soil water from sowing to harvest) between cropping systems treatments varying in crop intensity across farming systems experiments. 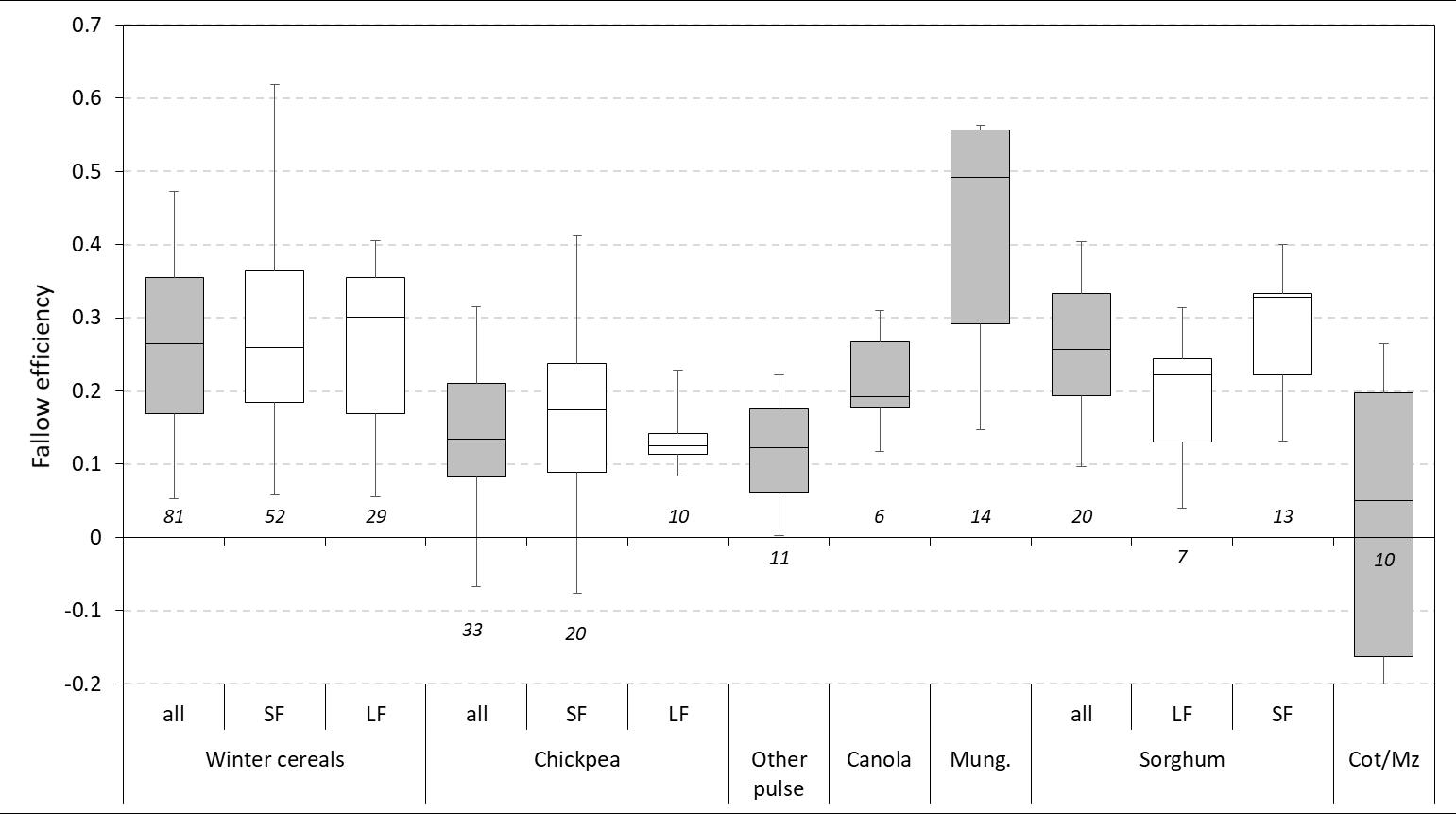 Figure 2. Summary of observed fallow efficiencies following different crops and different fallow lengths (SF – short fallows 4-8 months, LF – long fallows 9-18 months) across all farming systems sites and treatments between 2015 and 2018; winter cereals include wheat, durum and barley; other pulses include fababean and fieldpea. Boxes indicate 50% of all observations with the line the median, and the bars indicate the 10th and 90th percentile of all observations. Italicised numbers indicate the number of fallows included for each crop.

What this means is that, the impacts of a particular crop on the accumulation of soil water in the following fallow should be considered in the cropping sequence. For example, a fallow receiving 400 mm of rain after a winter cereal would accumulate 108 mm on average, while the same fallow after a grain legume would have only accumulated 56 mm. This difference could have a significant impact on the opportunity to sow a crop and/or the gross margin of the following crop in the cropping sequence.

While we have observed lower fallow efficiency following grain legumes in the farming system, a frequently mentioned benefit of legumes is the residual soil water left at harvest that can be used in subsequent crops. In Table 3 we have compiled cases where chickpeas and wheat have been grown in the same season to compare the residual water at harvest and the accumulation of water until the sowing of the following crop. On numerous occasions we observed higher residual soil water at harvest after pulse crops (chickpeas, fababeans or field peas) compared to after wheat. This was often associated with rainfall later in the crops development where the winter cereals were able to extract this water while the pulses were finishing and did not utilise this additional water. On average across these 7 comparisons chickpea had 41 mm more soil water post-harvest compared to wheat, however, at the end of the subsequent fallow this difference was greatly reduced so that on average only 10 mm more water remained in the soil profile after chickpea compared to wheat or barley.  What this means, is that you shouldn’t bank on the additional moisture after a grain legume translating into additional soil water available for subsequent crops.

While we have shown above that there are a range of factors that affect fallow efficiency, it is important to factor in how effectively the subsequent crop turns the water available into grain and gross margin. From the seven farming systems sites, 42 crops had eight common crops at the end of fallows of varying length (Table 4). These comparisons showed that in 41 of the 42 crops, longer fallow periods (under the same seasonal conditions) have resulted in more plant available water (PAW) at planting of the common crop. The only crop that didn’t increase was an 18 month fallow, which didn’t increase from 2/3 full despite 700mm rainfall over a 12 month period.

In every comparison, higher PAW at planting resulted in increased grain yield, which in seven of the eight comparisons improved crop water use efficiency (WUE) i.e. grain yield/(in-crop rain + change in soil water) (WUE). The comparison where higher grain yield didn’t translate to higher water use efficiency was the highest yielding crop, with the highest WUE in these comparisons (ie. sorghum at Pampas in 2016/17). However, it is important to also factor-in the fallow rain required to achieve the higher plant available water at sowing. Here we have calculated this as the rainfall use efficiency (RUE) of these crops, i.e. grain yield/ (prior fallow rain + in-crop rain). This shows that once the efficiency of fallow water accumulation is considered then in most cases there was little difference in productivity of the systems in terms of kilograms grain produced per mm of rain (exclusions were a chickpea crop following a 18-month fallow at Pampas in 2017 and a sorghum double-crop at Pampas in 17/18).

While this shows that across fallow lengths leading into crops there is little difference in system productivity, this does not necessarily translate to system profitability. The crops with a longer fallow lead in had higher crop gross margins due to their higher yields. In 6 of the 8 comparisons between crops, higher gross margin returns per mm were achieved for crops with a higher PAW at sowing due to longer fallows prior. The two cases where the shorter fallow crops (wheat at Emerald in 2016, and sorghum at Pampas in 2016/17) had higher $ GM/mm, both had higher crop margins and high starting PAW (> 100 mm) at sowing. Across these comparisons the marginal gain in profit per mm of additional water at sowing ranged from $0.5-14.9, but was mainly between $1.1/mm and $2.2/mm.

Table 4. Comparison of yield and water use of crops with varying lengths of preceding fallow, for a range of crops and locations. Double crop is 0-4 month fallow; Short fallow is 4-8 month; long fallow is 9-18 months.

Overall these farming systems experiments have shown that systems with less time in fallow increases system water use and WUE through higher fallow efficiencies. However, significantly higher returns for crops sown on higher plant available water more than compensates for the low efficiencies of fallow water accumulation. This trade-off will be further influenced by the cost structure and risk appetite of the farming enterprise and the availability of labour, since higher intensity systems will increase inputs of labour and machinery and increase risk of crop failures. This is explored further in other papers. Though, this does mean that it is more critical to optimise management and inputs for crops following long-fallows in order to convert the extra water efficiently into yield outcomes.

Water use and accumulation

The research undertaken as part of this project (CSA00050, DAQ00192) is made possible by the significant contributions of growers through both trial cooperation and the support of the GRDC, the author would like to thank them for their continued support. We would also specifically like to thank all the farm and field staff contributing to the implementation and management of these experiments, the trial co-operators and host farmers