This work aims to create a reliable estimate of percentage nitrogen (%N) in a wheat crop, using sensors and machine learning, to inform an in-crop application of nitrogen (N) fertiliser.

The mid-season N decision is crucial for crop management and profitability. Many tools and decision aids have been developed to help inform a N decision. Most of these rely on making an assessment based on tissue analysis at mid-season to determine plant N status and future requirements. The fertiliser requirement is then calculated from these variables to determine the demand. Unfortunately, it can be difficult to identify the N demand across an entire paddock. Crop sensors and information like normalised difference vegetation index (NDVI) have been commonly used to calibrate a relationship between the vegetation index and potential yield using a linear regression. From this, a N demand can be calculated and used to inform a fertiliser recommendation. However, Colaço & Bramley (2019) showed that such sensor calibration, i.e. the relationship between the vegetation index (usually the NDVI) used and the yield is site-year specific. The implication is that the demand estimate generated from other paddocks, or seasons, is likely to be incorrect in the current year. Therefore, as mentioned, linear regressions are not enough to pick up the complexity of N decision. Here we evaluate the ability to predict %N in the crop at Z31 using a range of different crop sensors and different approaches to machine learning. In this preliminary study, fertiliser decisions were based on whether the crop met a critical %N threshold of four per cent. 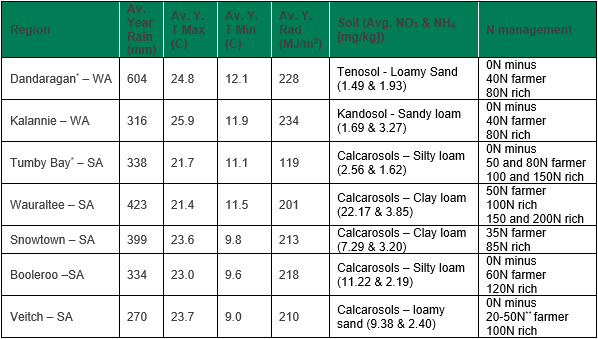 In each paddock two (N-rich and N-farmer) or three strips (N-rich, where N-rich is the double of N-farmer, N-minus, and N-farmer practice) were set and at least two samples in each strip were collected depending on the size of the paddock. Each sample consisted of 1m2, first scanned with a commercial proximal crop sensor and then cut and sent to an independent private laboratory to assess aboveground plant N concentration (Table 2).

Table 2. Variables and their sources used in the study To address the mid-season N decision, i.e. to identify if a site needed mid-season intervention (a binary decision: yes, wheat needs more N or no, there is no need to apply N), a stressed N content threshold of four per cent was considered based on Australian guidelines (Brennan & Scanlan, 2017). The random forest algorithm (RF), a machine learning method, was used to identify the most important predictors with a Recursive Feature Elimination (RFE) to assess %N and then a logistic regression was performed with the optimum predictors to assess the need for mid-season N application.

From the RF and RFE algorithms the optimum predictors were determined: Red Edge (RE) and Simplified Canopy Chlorophyll Content Index (SCCCI). With those the logit regression showed that the Red Edge reflectance was the significant predictor (Table 3).

Due to the logit coefficients (Table 4) the results can be used to assess the requirement for a mid-season N application.

This result is a combination of the best of both words, the high accuracy of machine learning with the interpretability of the traditional methods. The RF showed that the Red Edge and Simplified canopy chlorophyll content index were the optimum predictors of %N. The logistic regression showed that only Red Edge was significant at identifying the need of mid-season N in wheat. When tested against laboratory data the model accuracy was 96%, thus the model was able to correctly determine 96% of the time if the wheat was stressed and in need of more N.

The presented methodology can help farmers use red edge reflectance and SCCCI as indication of N deficiency or N sufficiency in wheat. The proposed method will be applied this season and to identify if there was significant difference on yield. After that, the next step is to develop apply the method and assess differences in yield, and to develop methodology to determine the optimum amount of N needed.

This work was supported by Grains Research and Development Company (GRDC) under the Future Farm Project (Project Number: 9176493). Authors are thankful to the farmers who contributed sites for the study.