Resistance to pyroxasulfone in annual ryegrass has been described as metabolism-based (Busi et al 2018). Moreover, a multiple-resistant population obtained after three generations of low-dose recurrent pyroxasulfone selection by Busi et al (2012) was also cross-resistant to prosulfocarb and triallate (Busi & Powles 2013).

In this context of herbicide resistance, research on the most effective use of pre-emergence herbicides in an integrated weed management program is needed. The research in the current study was focused on crop competition as affected by wheat plant density. While other practices, like reducing row spacing, E-W sowing, competitive variety selection and harvest weed seed control are also important, they were not the focus of this research.

The impact on general weed performance (as opposed to specifically herbicide-resistant populations) of increasing the crop seeding rate has been studied by several authors. For example, Lemerle et al (2004) studied increasing wheat seeding rates in nine experiments across the states of New South Wales (NSW), SA, WA, and Victoria (Vic). On average, doubling the crop density from 100 to 200 plants/m2, reduced annual ryegrass biomass from 100 to 50 g/m2. Having evaluated wheat densities from 50 to 400 plants/m2, they concluded that at least 200 plants/m were needed to suppress annual ryegrass.

Similarly, in a multi-site experiment conducted during 2010 and 2011 in three locations across WA, Borger et al (2016) found significant annual ryegrass fecundity reduction when crop densities were increased from 117 to 178 plants/m2 in three of six experiments. The reduction in weed seed production ranged from 34 to 75%.

In the current study, the focus was on the response of annual ryegrass that is resistant to pre-emergence herbicides, to determine if a combination of crop competition and herbicide mixtures could improve the control of resistant populations.

The research was conducted in the plant growth facilities at The University of Western Australia. It consisted of a factorial experiment in pots where herbicide-resistant ryegrass biotypes were treated with different herbicide treatments under different wheat densities. The following factors were tested:

Three wheat densities were sown using a target-neighbourhood model to test the effect of wheat competition on annual ryegrass (Vila‐Aiub et al 2009). The densities were a control with no wheat plants, a commonly used plant density of 150 plants/m2 and double that density (300 plants/m2) (Figure 1).

The wheat (var. Scepter) seeding date was 06 June 2019. Ryegrass seeds were pre-germinated in a 0.6% (w/v) agar medium. When the primordial roots were starting to be visible, 20 seeds per pot were transplanted on 11 June 2019. Herbicide was sprayed directly onto the weed seeds one day later, to simulate a post-sow, pre-emergence application (PSPE) in the field, using a dual-nozzle (Teejet® XR11001) cabinet sprayer delivering herbicide at 106 L/ha.

To guarantee a uniform wheat plant number, 20 seeds per pot were sown and then one week after their emergence, extra plants were manually eliminated. Ryegrass survival was assessed 28 days after the herbicide application. At that time, every pot that exceeded four surviving plants had the remaining plants removed to ensure a constant ryegrass density of 80 plants/m2. During the experiment, all the pots were irrigated and fertilised as needed.

Harvest was done when the plants reached maturity, on 22 October 2019 (wheat) and on 14 November 2019 (ryegrass). After harvest, heads were threshed and seeds counted. Final plant biomass was oven-dried and then weighed.

No differences were observed between the two analysed populations. Therefore, all of the analyses were performed on combined population data. On the other hand, there was a significant interaction between the herbicide treatments and the genotypic condition (i.e. parental F0 vs. crossed F1) effect (p<0.0001).

The mixture of prosulfocarb and pyroxasulfone was the most effective treatment, regardless of the genotypic condition of the population (Figure 2). Prosulfocarb also showed high efficacy and resulted in a survival lower than 20% for both the parental and F1 populations. Pyroxasulfone treatments showed an interaction effect, where the F1 crosses had fewer surviving plants when compared with the F0 resistant parents. In the full-dose treatment, the survival of the F0 was 43% on average and 23% for the F1. This observed difference may be explained by the semi-dominant inheritance of pyroxasulfone resistance (Busi et al 2014). 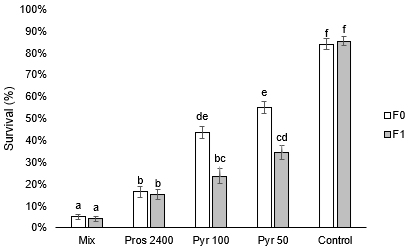 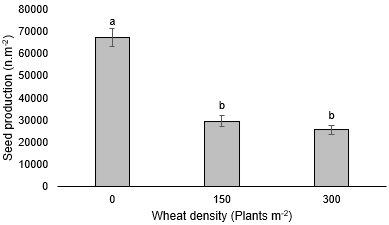 While the average of the prosulfocarb and the full-dose pyroxasulfone treatment reduced seed production by 46%, the mixture of both herbicides reduced it by 88% when compared to the untreated control (Figure 4). Although the interaction is not shown in order to clarify the analysis, the treatment that resulted in the lowest seed production was the herbicide mixture with 300 wheat plants/m2 (4 208 seeds/m2). 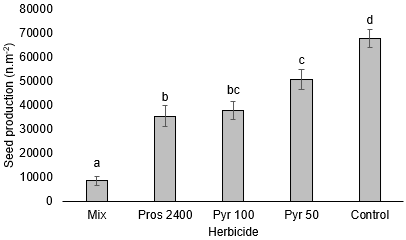 In the case of wheat yield, there were no significant interactions between sowing density and herbicide treatment. Wheat density was a significant factor (p<0.0001), with the highest yields obtained with the highest density. On average, the 300 plants/m2 treatment yielded the equivalent of 6.2 t/ha, while the density of 150 plants/m2 yielded 5.3 t/ha. However, these yields should not be extrapolated to a farming situation, since water and nutrition were never limiting factors.

Herbicide was the other significant factor that affected wheat yield (p<0.0001). Due to the irrigation effect, the differences between treatments were reduced with only the mixture differing significantly from the untreated control (Figure 5). This can also be seen in the regression analysis (Figure 6), where wheat yield was primarily explained by ryegrass biomass (R2 = 0.6; p<0.0001). 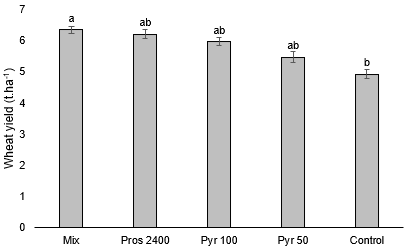 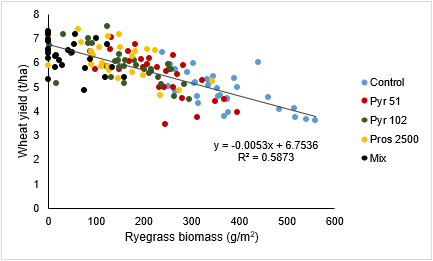 Based on the above research findings, a brief economic analysis is presented where we compared the cost of doubling the wheat density with the cost of using herbicide mixture rather than single products (Table 1). Only direct costs are compared, with associated costs such as impact on machinery efficiency by increasing wheat density (and therefore being able to sow fewer hectares per day) not considered. Since this is just an example based on some cost assumptions a deeper analysis considering each farming procedure is recommended.

Crop competition is a crucial tool to compete against weeds. However, in this experiment doubling the wheat plant density did not help significantly and had a differential cost of approximately $24.

Use herbicide mixtures! Besides the fact that they do slow the chance of developing herbicide resistance within a population, this trial also showed that by mixing two herbicides with different sites of action the survival and seed production of pyroxasulfone-resistant populations can be significantly decreased.

This research was part of my Masters thesis carried out at UWA during 2019. I would first like to thank the Argentinian government and the BEC.AR program that are supporting my studies in Australia. The research grant was supported by Royalties for Regions. I also thank the invaluable help provided by my supervisors, Dr Roberto Busi, Prof. Hugh Beckie and Dr Danica Goggin.

It was a big experiment! I could not have done it without the help of Carolina Martino, Martina Badano, Emanuel Gomez, Ci Sun, Justina Serrano, Sergio Banchero, Santiago Bertacca, Shane Baxter, and Paula Reeve. All of them provided some help to conduct the experiment.