Stored soil water at sowing is critical for the productivity of grain crops across many parts of Australia’s cropping zone, especially when in-crop rainfall is limited. Deep stored water can have a high marginal water use efficiency (i.e., the yield increase per extra mm of soil water at sowing) because it is available for use during the critical period for yield determination.  The impact of stored soil water on the yield of subsequent crops is highly season dependent.  In very dry seasons, the value may be low because of the low yield potential of highly stressed, low biomass crops, while in very wet growing seasons the reliance on stored soil water may diminish.  However, in many intermediate seasons, stored water will add to the total water available for crop growth, especially later in the season with significant productivity benefits.  Different management levers (crop sequence, sowing dates, N management) can influence the availability of stored soil water and these legacies can affect the productivity, water use efficiency and profit across a crop sequence.

In this paper we use data collected from recent GRDC farming systems research projects across Queensland and New South Wales to explore the question – ‘How do different crops in a sequence influence the soil water available to subsequent crops?’ This is influenced by both differences in crop water extraction (as highlighted in paper by Verburg et al. 2021 ) which can influence the residual soil water left at harvest, but also subsequent fallow water accumulation prior to sowing the next crop. Understanding how different crops influence the available water in the system for subsequent crops is important to (i) design crop sequences that make better use of this limited resource, (ii) to tailor management (e.g. sowing date, fertiliser applications or variety choices) based on previous crop history, and/or (iii) to avoid situations where low soil water could increase the risk of crop failure.

Across a range of experimental comparisons, we have found that legumes such as chickpea, fababean, field pea and vetch often leave more residual soil water at harvest than winter cereals and canola. This is evident in the both summer-dominant (Table 1) and the uniform rainfall zones (Table 2). However, the differences are not always consistent and vary significantly across seasons. In the summer dominant rainfall regions, it seems that in dry winters with limited spring rainfall (e.g. eastern Darling Downs in 2015) these differences were smaller, suggesting all crops could extract similar amounts of soil water under water-limited conditions. However, in wetter seasons or with higher spring rainfall (e.g. Narrabri and Liverpool plains 2016, eastern Darling Downs 2017) larger differences between the grain legumes and winter cereals and canola were evident. We believe this occurs because the legumes are beginning to senesce, reducing their water demand earlier in the spring and do not utilise soil water during that period to the same extent.  For example, in one such comparison on the eastern Darling Downs in 2017, legumes such as fababeans and chickpea had around 100 mm more soil water after harvest than wheat (Table 1).

In southern NSW, a range of different legumes also tended to leave more residual water in the soil profile, as shown for 2018 during a very dry spring period (Table 2).  This was evident on both the deep red loam soil at Greenethorpe and on the heavier clay sodosol at Urana.  The differences were evident in both early-sown winter comparisons at both sites, and in later-sown spring varieties.  The differences were in part due to the shallower rooting of later-sown legumes as shown by the differences in measured rooting depth at Greenethorpe (Table 3), which also shows the very deep rooting and drier soil profile following early-sown winter canola sown in early April.

While we regularly find more soil water left after grain legumes compared to wheat or canola, this may not always translate into more soil water at the sowing of subsequent crops, or to significant crop yield benefits (see Table 1 & 2).  Across our experiments, despite differences of up to 50 mm of more soil water left after grain legumes, the lower efficiencies of water accumulation during the subsequent fallow, has meant that differences in soil water often diminished prior to sowing subsequent crops. This occurred because drier soil profiles are less prone to evaporative losses of this water, and because of the higher levels of residue cover and enhanced rainfall infiltration following winter cereals and canola compared to the low and shorter-lived ground cover left after grain legumes. Some differences exist between northern and southern regions due to differences in soil types, summer rainfall intensity and frequency.

Table 1. Comparisons of residual soil water post-harvest of winter crops in the summer-dominant rainfall zone and implications for plant available water at sowing and yield of following crops in the sequence. Note: Only crops grown with a similar starting condition (e.g. fallow length) and a common crop following are compared. Other aspects (e.g. soil nitrogen, weeds and pathogens) are also influenced by the previous crop, hence all effects are hard to attribute entirely to soil water availability.

Table 2. Comparisons of residual soil water post-harvest of winter crops in the equi-seasonal rainfall zone of southern NSW and implications for plant available water at sowing and yield of following crops in the sequence. Note: Only where crops were grown with a similar starting condition (e.g. fallow length) and a common crop following are compared. Other aspects (e.g. soil nitrogen, weeds and pathogens) are also influenced by the previous crop, hence all effects are hard to attribute entirely to soil water availability.

Agronomy to manage the legacy of dry soils after high yielding, early-sown crops

Early-sown, high yielding crops can leave a legacy of drier and N-depleted soils in seasons where the spring is dry (as in 2018 and 2019 in much of southern NSW and northern Victoria) (see Figure 1).  If the subsequent rainfall during the summer fallow is low and fails to refill the soil profile, it may be necessary to reconsider the crop sequence plan, or the intended sowing date of subsequent crops in order to avoid high risk scenarios. 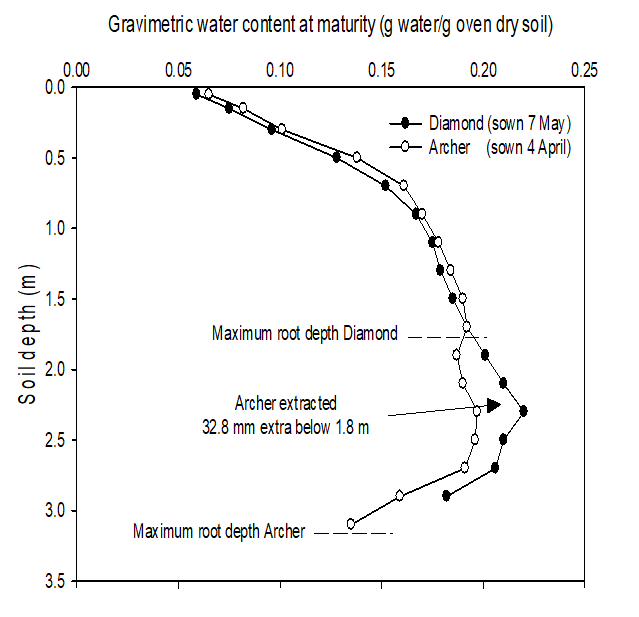 The issue of better managing the legacy effects is the topic of the current farming systems project where a range of crop sequence choices have been combined with early- and later-sown crops with different nitrogen management to investigate the productivity, profitability and risk of different management options.  Table 3 shows the residual plant available water and mineral N to 2m depth following a range of crops at Greenethorpe in 2018.  The early-sown winter canola had no plant available water left in the top 2m, while the other crop options had between 24 and 57 mm more stored water left in the profile.  The legumes also left a legacy of higher soil mineral N.  The different rooting depth and water use patterns of these crops may provide opportunities to plan sequences where high value legumes can be grown in sequence with early-sown, deep-rooted grazing crops both to capitalise on the water and N left by the legume, and to reduce the risk of negative legacy effects after early-sown crops, by sowing a less water-demanding crop.

Table 3. Residual plant available water (mm) and mineral N (kg/ha) at harvest to a depth of 2m following a range of different crop options at Greenethorpe in the dry year of 2018.

A summary of the pros and cons of the various options to precede early sown canola crops is shown in Table 4, as water is not the only aspect of the farming system influenced by crop choice.

Table 4. A summary of the impacts of different preceding crop choices to precede early sown canola crops (the more stars the better for each aspect).

We have also found some differences in summer crops in terms of their influence on residual soil water and available water in subsequent crops (Table 5). In our experiments, two direct comparisons (sown on same data on common history) between cotton and summer cereals (maize or grain sorghum) have shown cotton leaving the soil around 20-30 mm drier. However, because of the lower ground cover after cotton, the difference was preserved until the sowing of the subsequent crop following both short (8 month) and long (18 month) fallows. In both cases, the difference in starting soil water resulted in a significant yield difference of 0.7 and 1.2 t/ha in a subsequent sorghum crop. Our data also suggests that mungbean often leaves additional soil water compared to sorghum, though this can depend on the relative timings of the crops. However, as with the winter grain legumes this difference in soil water is often diminished by the time subsequent crops are planted.

Table 5. Comparisons of residual soil water post-harvest of summer crops in the summer-dominant rainfall zone and implications for plant available water at sowing and yield of following crops in the sequence. Note: Only where crops were grown with a similar starting condition (e.g., fallow length) and a common crop following are compared. Other aspects (e.g. soil nitrogen, weeds and pathogens) are also influenced by the previous crop, hence all effects are hard to attribute entirely to soil water availability.

While our experimental results provide a diverse range of seasonal and production environments, it is likely that the residual water left by different crops will be highly influenced by seasonal conditions and timing of rainfall. Hence, we have used the APSIM model to predict over 50 different seasons (1957-2012) how wheat, canola and chickpea compare in terms of residual soil water in 2 contrasting environments (Goondiwindi and Wagga Wagga). These predictions are consistent with our observed data. At Goondiwindi, in 3 out of 5 years chickpea is predicted to leave 20-30 mm more soil water at harvest than wheat and canola. These differences are smaller under the wettest 30% of seasons where large rainfall events at harvest or late in the season replenish soil water in the profile in all crops. At Wagga Wagga, differences in residual soil water between chickpea and wheat were small and only occurred in the driest 25% of years. On the other hand, APSIM predicted the canola had a 15-20 mm drier profile than wheat or chickpea in 3 of 4 years.

These long-term predictions are consistent with our experimental findings, demonstrating relative differences between wheat, canola and chickpea and these findings are likely to occur in other seasonal conditions. While other legumes such are lentil or fababean have been shown to leave more soil water than chickpea, we are unable to simulate these crops reliably in APSIM at present. However, we would expect differences in soil water at harvest to diminish by sowing of the next crop after lentils in a similar way as measured and predicted for chickpea here. Figure 2. Long-term predictions of soil water remaining at harvest and accumulated prior to sowing the following crop after wheat, canola and chickpea at two locations representing the summer-dominant rainfall zone (e.g., Goondiwindi) and the uniform rainfall zone (e.g. Wagga Wagga). Each point shows the predicted value arranged from the lowest to highest to demonstrate the range of possible outcomes and their relative likelihood for each simulated year for a phased crop rotation involving chickpea-canola-wheat.

The research undertaken as part of this project is made possible by the significant contributions of growers through both trial cooperation and the support of the GRDC, the author would like to thank them for their continued support. We would like to thank the numerous members of our project teams and collaborators contributing to the management and implementation of the farming systems experiments across the northern region.