Herbicide resistance is a major concern for northern region crop production due to the increasing frequency of resistance in key weeds. Non-herbicide weed management alternatives are needed to delay the spread and onset of further herbicide resistance (Walsh et al., 2013). One such alternative is harvest weed seed control (HWSC). Harvest weed seed control (HWSC) refers to a suite of management practices all of which target the seed of weeds present at harvest time and borne at harvestable height (typically around 15cm or more above ground height, depending on header set-up).

Current HWSC systems include narrow windrow burning, chaff tramlining/chaff lining, chaff carts, bale direct and seed destruction (Walsh et al. 2013). Chaff lining and chaff tramlining have potential for wide-spread adoption in northern Australia owing to their low cost and ease-of-implementation relative to some other HWSC practices. Chaff tramlining is the practice of concentrating the weed seed bearing chaff material on dedicated tramlines in controlled traffic farming (CTF) systems, typically using a chaff deck to deposit chaff into 2 lines (one per wheel track). Chaff lining is a similar concept, where the chaff material is concentrated using a chute into single narrow row between stubble rows directly behind the harvester (i.e. not specifically onto the tramlines).

The proportion of weed seed entering the front of the harvester is key to the efficacy of harvest weed seed control methods. An increasing number of Australian grain growers are adopting stripper harvester fronts. These fronts use rows of fingers on a spinning rotor to pluck grain heads and pods from mature crop plants.  Conventional (known as Draper) header fronts cut and collect the entire plant above the harvest height. Stripper fronts leave more stubble standing. By reducing the quantity of material being processed, harvester stripper fronts increase the speed and efficiency of harvesting. Because HWSC relies on weed seeds entering the harvester, it is important to know whether stripper fronts can achieve weed seed collection proportions similar to conventional fronts.

The weed seed collection effectiveness of stripper and conventional harvester fronts was compared in wheat paddocks on two different farms near Wagga Wagga (Figure 1). At Site 1 the proportion of annual ryegrass seeds collected by the stripper front was identical to that of a conventional front. In contrast, at site 2 a lower proportion of ryegrass seed was collected by the stripper front. Row spacing was greater at this site and the harvester was running faster and higher than at Site 1, which could have reduced the seed collection and therefore HWSC efficacy. 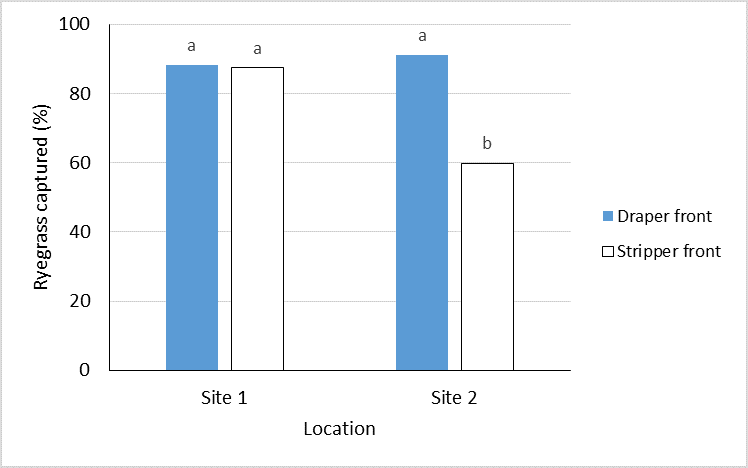 These results suggest that, with due diligence, a stripper front can collect a similar proportion of annual ryegrass seeds as a conventional front and can be used in conjunction with HWSC systems.

There have been anecdotal reports that weed seeds die or fail to emerge from chaff lines and chaff tramlines. Pot trials were conducted at three locations (Toowoomba, Wagga Wagga and Narrabri) to investigate the influence of wheat, barley, canola and lupins chaff on the seedling emergence of annual ryegrass (Broster et al., 2018; Ruttledge et al., 2018). Although the amount of chaff required to significantly reduce germination differed between studies, increasing amounts of wheat chaff reduced annual ryegrass germination and emergence at all three locations. Wheat chaff at 24 t/ha reduced annual ryegrass emergence by approximately 15 to 35% across the three pot trials.

The type of chaff can also influence emergence of weed seedlings. A pot study conducted at Wagga Wagga explored the emergence of annual ryegrass under 4 chaff types (barley, canola, lupins and wheat). While there was an interaction between crop type and chaff amount (Figure 2), overall barley inhibited emergence better than wheat, and both were better than canola and lupins. For each chaff type the effect of rate was significant (i.e. for all 4 chaff types, weed emergence decreased as the amount of chaff increased). 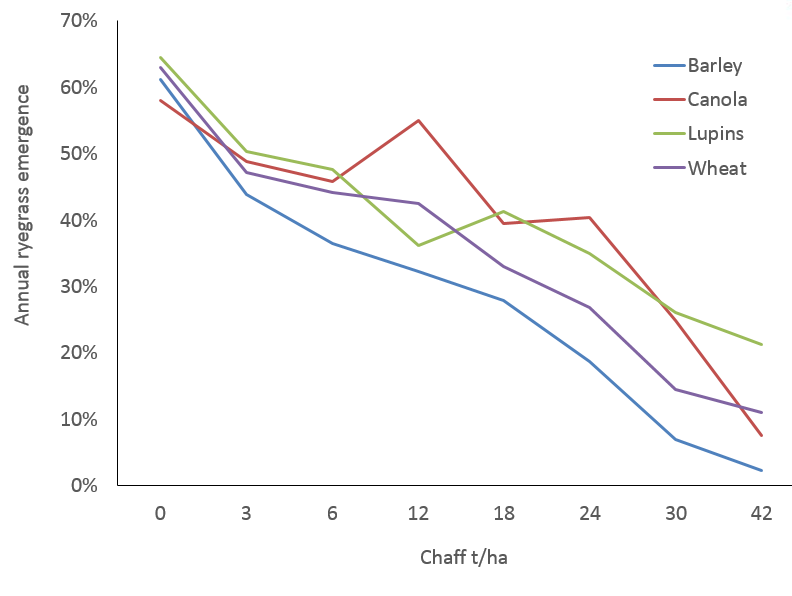 Pot experiments conducted in Toowoomba compared the emergence of common sowthistle under wheat and barley. In the first study, wheat chaff suppressed emergence more than barley chaff, although there was no significant difference between the two chaff types. In a subsequent repeat of this pot study, wheat did have significantly greater suppression of common sowthistle compared with barley chaff (Figure 3). Possible reasons include physical or chemical differences between the wheat and barley chaff used in this experiment. In both studies, 12 t/ha was sufficient to significantly and dramatically reduce sowthistle emergence in the wheat chaff treatment. 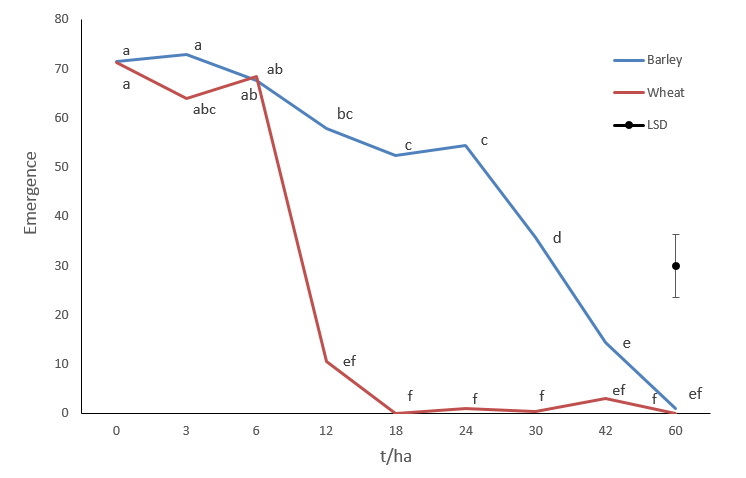 There are anecdotal reports of weed seed rot in chaff lines/chaff tramlines. On-farm research conducted on the Queensland Darling Downs has compared the viability of weed seeds inside and outside of chaff tramlines. Seeds of annual ryegrass, sowthistle, turnip weed and wild oats were placed in fibreglass mesh bags and left for 6 months in 2 barley paddocks (1 harvested using a conventional draper front and one harvested using a stripper front) and in a wheat paddock (conventional front only). At the end of this period the viability of the remaining seeds was determined. There were no significant differences between the seeds placed inside tramlines and those placed outside of tramlines, for any of the 3 paddocks (Figure 4). In other words, weed seeds placed in tramlines did not appear to decay any faster than those left on the soil surface outside of tramlines. 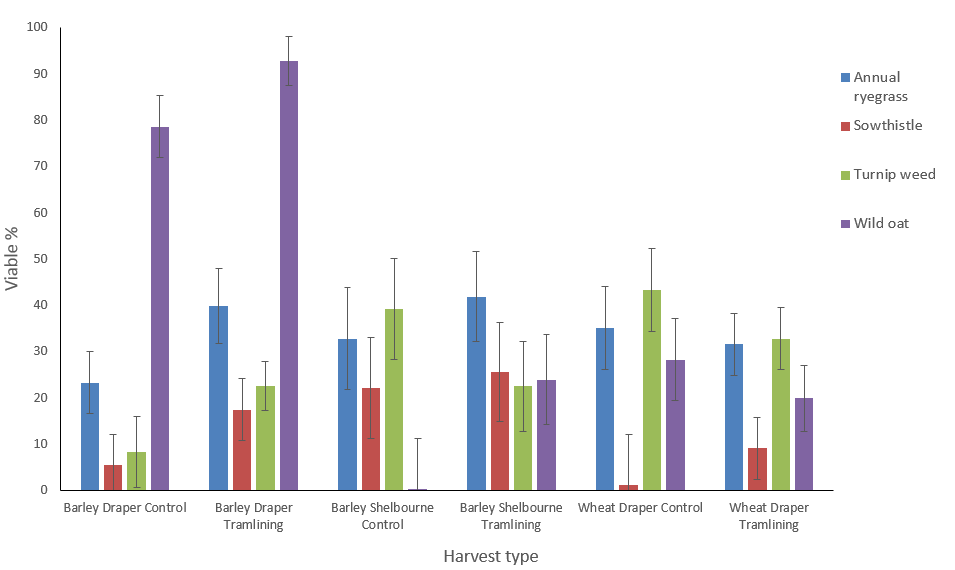 Figure 4. Viability of weed seeds collected after 6 months in barley and wheat fields, both under chaff tramlines
and outside tramlines (control treatment) (Ruttledge et al., 2018).

However, multiple factors are involved in weed seed decay, including temperature, moisture, chaff type and amount, and characteristics of the weed seeds themselves. In other words, what happens to weed seeds in chaff lines or chaff tramlines is likely to vary according to site, season, crop type and weed type.

As outlined above, research indicates that weed suppression increases with the amount of chaff cover. The amount of chaff that accumulates in chaff tramlines or chaff lines could also have implications for other farming operations (e.g. planting). 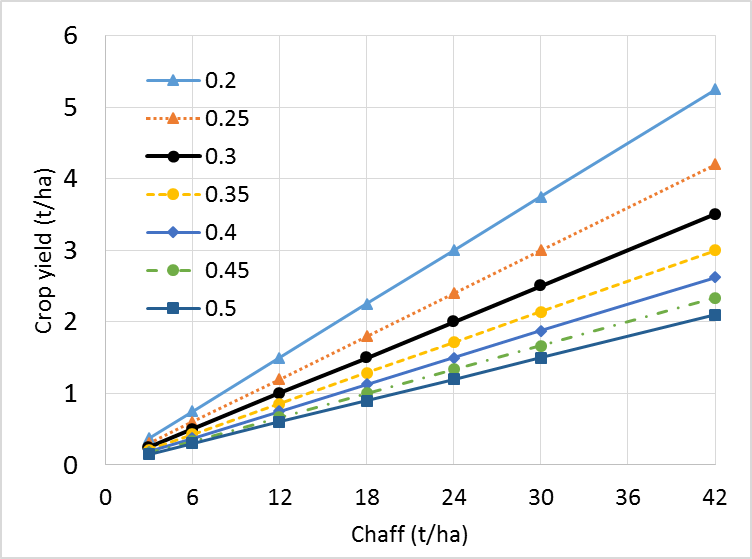 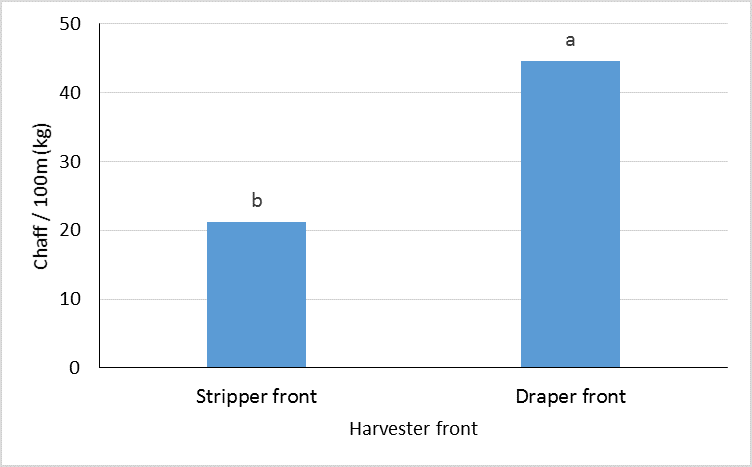 Chaff lining and chaff tramlining are forms of harvest weed seed control with the potential to capture weed seeds at harvest time and concentrate them in the chaff residues. Weed seeds buried in chaff can have reduced emergence, but the extent of suppression depends on the characteristics of the chaff (crop type, chaff thickness) and also on the weed species. Depending on the seed ecology of weed species, some weeds will be more susceptible to burial in chaff than other weeds.

Research conducted to date does not indicate that weed seeds rot more quickly when concentrated in chaff tramlines. However, the fate of weed seeds is strongly determined by environmental conditions (moisture, temperature, predation etc.) as well as the characteristics of the weed seeds themselves. This means that the extent and rapidity of seed decay is likely to vary from site to site, season to season, and between chaff type and weed type.

The amount of chaff deposited in chaff tramlines is likely to influence the fate of weed seeds, and this is in turn dependent on crop type, planting density, row spacing, header set-up, harvest speed, and the type of header front used (with less chaff produced by a stripper front).

The efficacy of HWSC techniques, including chaff lining and chaff tramlining, will depend on maximum capture of weed seeds at harvest time. The use of stripper fronts is compatible with HWSC but care is needed in harvester operation to maximise seed collection. Header settings (e.g. height) and harvest speed can all influence the efficacy of weed seed collection by both conventional and stripper harvester fronts. Further research is needed to determine how agronomic considerations (e.g. crop architecture and planting design) can optimise weed seed collection during harvest. Additionally, attributes of the weed species, the weather and the amount of seed shed which has occurred before harvest will have an impact on the accuracy of weed seed collection using HWSC practices (Broster et al., 2018).

In summary, weed seeds captured during harvest and concentrated into chaff residues can have reduced emergence due to the presence of crop chaff, especially at high chaff loads. It is evident that weed seeds of key northern species can remain viable in a tramline environment for 6 months, and potentially longer (work being conducted at present will establish the viability of seeds after 11 months in the field). However, by using chaff tramlining or chaff lining, weed seeds captured during harvest are concentrated into one or two lines per header pass, where they can be monitored and treated in targeted weed control strategies (e.g. using high rates and a shielded sprayer).

The research presented in this paper was made possible by the significant contributions of growers through both trial cooperation and the support of the GRDC. The authors would like to thank them for their continued support. The authors also gratefully acknowledge the following people for their assistance with the establishment and assessment of experiments: Allison Chambers (CSU), Linda Heuke (USyd), Shona Robilliard (USyd), a number of CSU students, Onella Cooray (QDAF), Jeff Werth (QDAF) and Adam Jalaludin(QDAF). The authors would also like to thank Kylie and Peter Bach for hosting the QLD trial site.

Heap, I. The  International Survey of Herbicide Resistant Weeds.